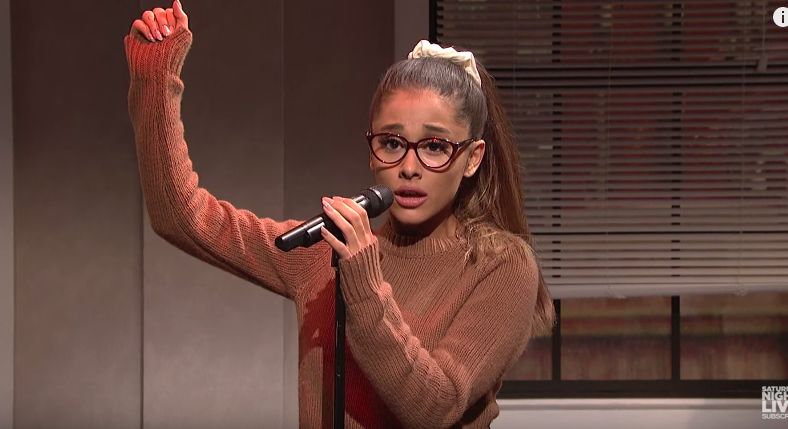 After starting off her SNL gig with a bang by swearing in the opening number, Ariana Grande settled down and turned in a mostly impressive performance as host and musical guest. Showcased to great effect: her ability to mimic just about anyone whose vocal abilities were within her range. Ariana pulled off a wickedly sarcastic take on Jennifer Lawrence in an otherwise meh “Family Feud” sketch:

…Then really showed her stuff in a sketch where a meek intern was called in to aid the tech team behind the Tidal music streaming service.

Not bad. With barely a hitch, Ariana Grande nailed the vocal mannerisms of early career Britney Spears, hilariously captured Shakira’s characteristic sexy hiccup sound and then issued a little burn to Rihanna. She wasn’t quite as firm with her Celine Dion, but it was fine—she went out with a spooky good Whitney Houston.

If Grande was out to prove something about just how versatile a performer she truly is with her SNL performance, she may have totally pulled it off. We hope someone lets her lick a dozen donuts in celebration soon.