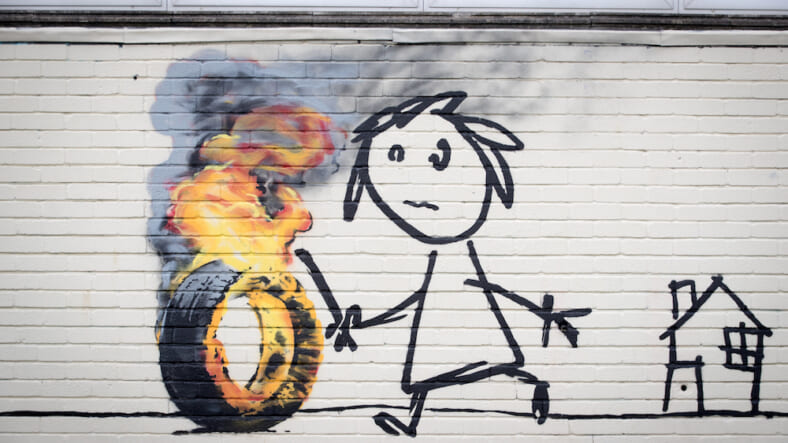 A Scottish journalist believes he has determined the identity of elusive graffiti god Banksy. In a now-viral post to Transmission Glasgow, Craig Williams points his finger squarely at Robert “3D” Del Naja of the Bristol-based “trip hop” group Massive Attack.

The reason? Besides the fact that the duo hails from Bristol and that 3D admitted to being a street artist in the ’80s, Banksy art keeps cropping up in locations that coincide with Massive Attack performances.

For instance, Banksy left his mark on Melbourne in April 2003, close to a March performance by Massive Attack. In October 2006, Banksy held an exhibition in Los Angeles, where the band had a gig in September 2006.

Some of Banksy’s most notably work appeared in New Orleans in 2008 while Del Naja was co-writing the soundtrack to the Katrina documentary Trouble the Water.

The same pattern recurs in San Francisco, Toronto, and Boston in 2010.

So, either Banksy is some inseparable friend or groupie (unlikely) or Massive Attack is Banksy (more likely).

Countless Banksy theories has been bandied about before, but Williams is not the first to connect these dots. This rather potent rumor first materialized after those North American overlaps in 2010 but is only now at a fever pitch.

Will the real Banksy please stand up?