Rumor: Cowboys QB Dak Prescott Won’t Have Sex With His New Girlfriend Until the Season Ends

The way the Cowboys are playing, that’s going to be pretty soon. 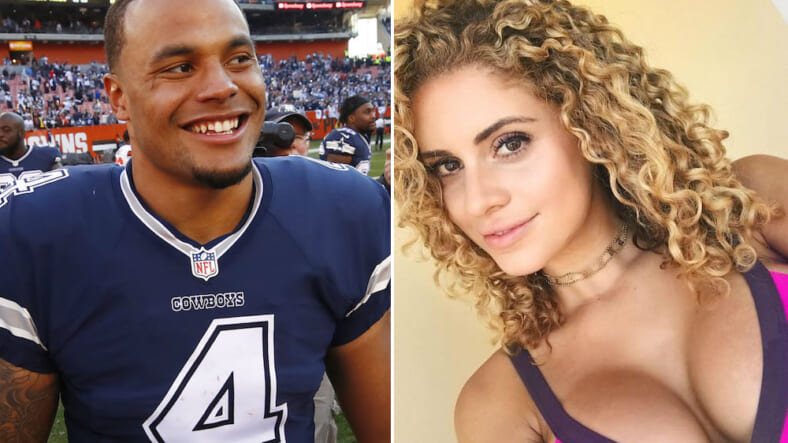 Rumors have been flying for a few days about Dallas Cowboys quarterback Dak Prescott and Instagram bombshell Yasmine Nicole. The fitness model ignited the rumors herself by posting a couple photos of her watching her man in action. Though she doesn’t name Prescott in the two Instagram photos she’s posted at Cowboys games, she is wearing his shirsey in one of the pics. That’s about as big a tell as you could ask for.

It’s obvious why Prescott would be interested in her. What’s less obvious is why he would voluntarily abstain from sex with her. But according to Terez Owens, that’s just what the 24-year-old quarterback is doing.

We’re hearing Dak is taking things very slow wit his new lady. “Dak is enjoying the process of getting to know her without the pressure of having sex, he already told her that he won’t be doing anything until the season ends, or until they’re mathematically out of the playoffs” says our source.

If this is supposed to keep Prescott focused on football, then it’s not working. The Cowboys have lost their two games, although it wouldn’t be fair to blame Prescott for either L. In both outings he threw for three touchdowns and more than 250 yards.

Still, if the Cowboys are going to win with their porous defense, they’ll need more out of Prescott. But given the line he’s drawn with Yasmine Nicole, it’s worth asking if the guy even wants to win. Remember, the more he loses, the sooner they have sex.