Somewhere between the dick and the asshole is the douche. 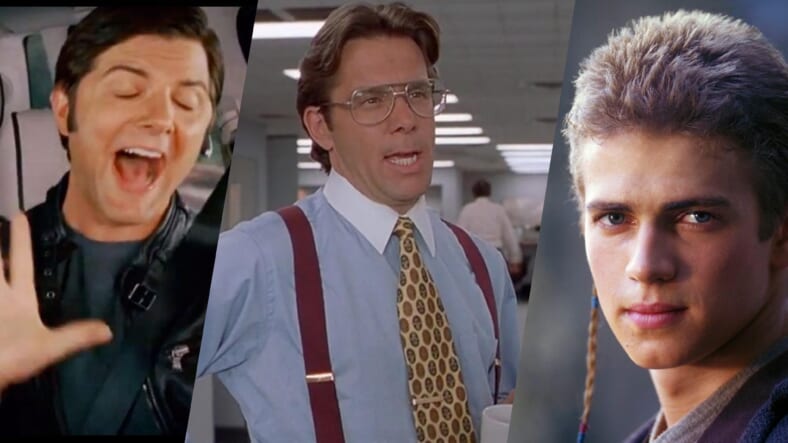 Not quite a villain, not quite a henchman, the douche acts of their own accord in a way that’s simultaneously obnoxious, cringey and malicious. Yet this is a relatively new phenomenon that actually seems to have emerged in the mid-80s. You’d be hard-pressed to find many true 20th century douches before that.

In real life you encounter them at school, at work, behind the counter at the DMV and in packs at bars across the world but, in case you don’t know how to spot them in the wild, check out these movie douchers who take douchebaggery to the next level.

The faux-emo haircut, the pathetic dance number, the sad negging he throws at MJ, it was all positively douchetastic. Granted, a lot of Parker’s douchery comes from the alien symbiote suit but, either way, we learned an important lesson. With great power comes a huge douche.

This half-brat/half-bully is all douche. Constantly exhibiting the douchiest of traits, from getting punched in the face to letting his goons do his dirty work, Draco is the reigning douche king of Hogwarts which is quite the feat when you realize like a third of the entire wizarding students of the world go there.

It’s hard to find a Sandler movie without a douche (FYI, if you can’t find the douche, it’s probably Sandler himself) but Shooter McGavin takes the prize. The finger guns when he sinks a putt, the way he buys Happy’s grandma’s house, his inclination to cheat instead of compete; all moves straight out of the douche textbook… which he must have studied, because he’s a douche.

Rand is rocking a Napoleon complex, some serious white privilege and a case of BMW-owner, so it’s no wonder that he’s the sniveling douche sidekick to Jessica Walter’s evil dean.

Spader’s douchiness rises to the top of the brat pack in Pretty in Pink on several occasions, but none more than making your friend choose between some “low-grade ass” and the friendship of a douche.

Before he was Darth Vader, he was Anakin Skywalker, and he was a douche. A rare mix of momma’s boy, whiner and idiot, Anakin rode his douchebaggery all the way to the dark side of the force. Here he is confusing seduction with complaining about sand like only a douche could.

You don’t have to guess if Globo Gyms are full of douches, this commercial confirms it. Hell, this commercial flaunts it. As its founder, that also guarantees White Goodman is a grand poobah in the cult of douchedom. Just look at that frosted, feathered hairdo.

8. Joe Pantoliano as Cypher, The Matrix

Cypher constantly announces the obvious, throws pessimism all over his teammates, sells out humanity to be an actor and is a stumbling putz in every fight despite, presumably, having some ass-kicking instructions uploaded directly to his dome. Fuck this douche and his flavor-saver half-goatee.

Lumbergh is the suspender-wearing boss-douche whose existence only inspires hatred. His nagging for TPS reports, threats of Saturday in the office and non-ironic use of the phrase “mmmkay” all come together to make Lumbergh a hall-of-fame douche.

6. Thomas F. Wilson as Biff Tannen, Back to the Future

This is a unique one because we don’t know much about Don. What we do know is that he exudes douche so completely, simply looking at his douche face tells you he’ll probably end up a mall cop or a vice principal when he finally gives up his dream of “managing” his girlfriend who he’s convinced could be a popstar/model because she won a local beauty pageant. That face and its rapid-fire douche emotions say it all.

We wanted Barry in here for two reasons. 1. It’s a reminder that Chris Pratt was actually in Wanted… in a scene where Star Lord gets smashed in the face by Charles Xavier. 2. Pratt plays such a perfect douche in the movie—even as a cameo—that he deserves every bit of that keyboard to the head.

It’s a fine line between villain and douche. We plant Cal firmly on the douche side because he’s more pretentious and cowardly than evil, preferring to have his henchman do his dirty work unless it’s to throw a hissy fit or slap a woman in a huge, fancy gown. He’s also got a face that’s begging to have a fist buried in it.

Spoiled rich kid from a mob family with body guards who does whatever he wants because consequences don’t apply to him. It’s a formula that’s as guaranteed to produce a douche as killing John Wick’s dog and stealing his car are guarantees to make you the target of a city-wide, stop-at-nothing killing spree.

The absolute epitome of the douche, Derek wears a bluetooth headset constantly, has dude-bro cronies at work, is a one-upper, a put-downer and oozes douche in every scene. He’s our favorite douchebag and that’s really saying something.

Never in all of cinema has a franchise been so riddled with douches as the Karate Kid. The original even has its own breeding ground for douches—the Cobra Kai dojo—where Kreese actually teaches and encourages douchery to his students like Johnny. Of course there’s also Chozen who flaunts an old-world, honor-based douchedom in Okinawa. Then there’s Julie Pierce who toes the line between brat and douche in her female remake of the ’80s classic followed by Jaden Smith, who’s both a douche in the movie (that never should have been remade) and a douche in real life because he fucking agreed to remake it. Karate Kid, we salute the douchetrocity you’ve unleashed upon mankind.