Have you ever read a list about Dave Chappelle’s masterpiece… on weed? 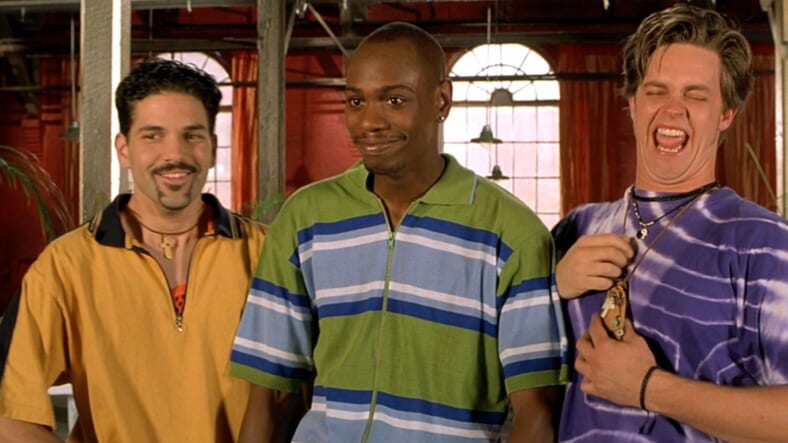 Twenty years ago today, a little movie starring a little-known comedian got very little attention by anyone. Half Baked had come out in January, flopped at the box office, and by April, it was out of theaters.

Too bad, because in the two decades since, Dave Chappelle‘s ode to Mary Jane has become the most watchable 4/20 movie in all of cinema. Come along as we celebrate the 20th 4/20 that we’ve been able to watch Half Baked with these highly entertaining nugs of information.

10. The opening was almost scrapped

The movie’s opening scene made the studio nervous. Apparently something about teenagers blazing up spooks the suits. But, as director Tamra Davis told Mass Appeal, once it was screened for audiences, everyone was on board.

We were in a movie theater in Pasadena with like 400 teenagers. All of the studio executives are standing in the back, and I’m standing back there. It’s really hard to be a director at that moment. You’re freaking out. The lights go down and that opening scene played and the theater went crazy for that opening scene. The whole theater just like exploded and the executives looked at me and they said, “Okay, you can keep your opening.”

9. The director made some classic videos

Davis has an impressive music video resume that she put to use on the film. Among her highlights are “Wild Thing,” by Tone Loc, “MMMBop,” by Hanson and “Shoplifters of the World Unite” by The Smiths.

8. Co-writer Neal Brennan has a cameo

Dave Chappelle isn’t just the star of Half Baked, he and his writing partner Neal Brennan wrote it too. Chappelle’s other half makes a brief cameo in the movie, playing the cashier in the burger joint where Scarface nearly goes postal.

When Snoop sat down on a fake studio stoop to shoot his cameo, he pulled out a real joint, Davis recalled in a interview with Yahoo earlier this year. She was terrified that it would create trouble and became even more terrified when security began descending on her set. Turns out, they just wanted to meet a legend.

“I was like, ‘Oh no.’ And then as soon as we cut, they all surrounded him and wanted his autograph. They were so psyched to meet him,” she said.

The rest of the “weed” in the movie was a tobacco-based substitute.

The guy on the couch was inspired by a real-life friend of Chappelle and Brennan’s who was constantly crashing on their couch while they wrote the script. Legendary one-liner comic Steven Wright, who was offered a role after he and Chappelle met on a late night show, played the guy in the movie.

4. Jon Stewart was a method actor

There’s a reason Jon Stewart seemed so high in his scenes: He was actually high.

Half Baked is packed with cameos, but there was one the filmmakers were unable to secure. Jerry Garcia, who died in 1995, was portrayed by impersonator Dave Bluestein.

2. Dave Chappelle and Jim Breuer starred in a sitcom together

Though it’s their most well-known collaboration, Chappelle and co-star Jim Breuer actually worked together prior to Half Baked. They previously paired up on a 1995 episode of Home Improvement. They were so good together that ABC signed them up for their own sitcom called Buddies. Breuer was replaced before the show hit airwaves though. Not that he missed out on much. Buddies was cancelled after only five episodes.

1. Not everyone loves the movie

As much as you may love Half Baked, Chappelle and Brennan don’t. Brennan once told Joe Rogan that he and Chappelle were steamrolled by the studio, which dictated the terms of the movie to the them. “In the end, it didn’t end up the way I’d hoped or Dave had hoped,” he said.