10 Facts About ‘The Matrix’ On Its 20th Anniversary

Just how deep does the rabbit hole go? 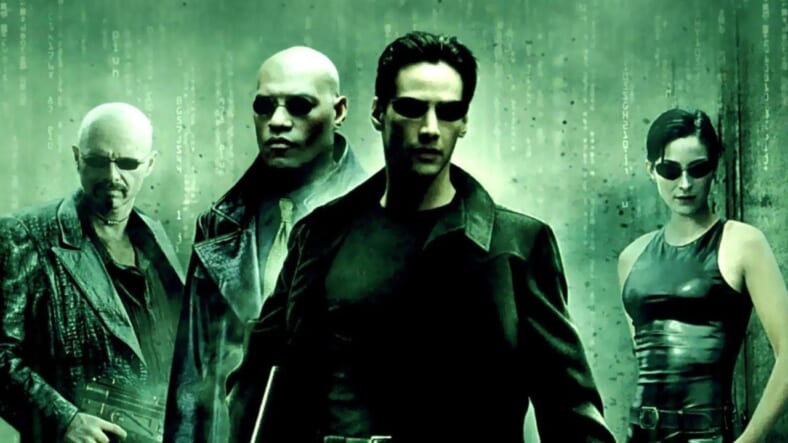 For a movie that still feels intensely futuristic and relevant today, it’s a shock to realize The Matrix is officially 20 years old.

No, seriously. It premiered in theaters everywhere on March 31, 1999, and went straight into the pop culture history books as an inexhaustible source of one-liners, memes, and stoned conversations in college dorm rooms about the nature of reality.

The cyberpunk epic, written and directed by twins Lilly and Lana Wachowski, could easily have dropped out of sight. The Wachowskis, after all, don’t always nail it (Jupiter Ascending, anyone?).

But with novel bullet-time camera work that still impresses today and intense—and intensely physical—performances from a diverse crew of actors like Keanu Reeves, Laurence Fishburne, and Carrie-Anne Moss, the filmmakers found lightning in a bottle and they ran with it.

Ultimately we got a full trilogy out of the story of Neo (Reeves) discovering his reality was absolutely nothing like what he thought, with The Matrix Reloaded and The Matrix Revolutions. And while the second and third movies were big budget hits and misses for many (Reloaded was pretty good, Revolutions was, uh, not), the original still stands alone as an all-time sci-fi classic.

With a hat-tip to Mental Floss among many others, let’s celebrate the 20th anniversary of The Matrix with 10 fun and fascinating facts about the movie you might not know.

Screenwriting instructors will tell you the opening scene of Trinity (Moss) kicking all kinds of ass is Great Writing 101. It better be, it cost the Wachowskis their original budget of $10 million. It was a calculated risk that paid off. Execs saw the footage and gave the sisters $50 million more.

To his credit, Smith couldn’t wrap his head around the Wachowski’s freaky-sounding story pitch and went with the more concrete-sounding option. If his telling of the story is any indication, he knows he didn’t choose the right pill.

‘The Matrix’ was filmed in Sydney, Australia, but the Wachowskis hearts were in Chicago

Outdoor moments like the street scene above took place in that big city down under. But the Wachowskis were born and raised in the Chicago area and used names familiar to them in their characters’ dialogue, such as referring to a phone at “Wabash and Lake.”

The actors all underwent grueling combat training with Hong Kong martial arts choreographer Yuen Woo-Ping in order to be convincing onscreen. Keanu Reeves alone would train up to 10 hours a day at times.

‘The Matrix’ is color-coded

There’s one easy way to know if you are in the actual Matrix: Everything is overlaid with green. The filmmakers meant to do that. Green for the unreal world created by the machines and blue tint for the world of Zion. The clip video above was simply designed to illustrate the way the Wachowskis approached color across the entire trilogy.

Hugo Weaving and Keanu Reeves were both playing hurt

Reeves had surgery on his upper spine prior to his fight training and had to wear a cervical collar the entire time. Hugo Weaving (Agent Smith) suffered a hip injury and needed surgery. Carrie-Anne Moss and Laurence Fishburne were hurt as well. It was pretty damn brutal.

Keanu Reeves had to shave his head and lose at least 15 pounds for the scene in which he comes to in his real body and finds himself in the battery pod—it only made sense to wait until all the other shooting was done.

“Bullet time” was basically created for use in this movie

By rigging up 120 digital still cameras and a pair of film cameras to shoot Bullet Time scenes, the Wachowskis immediately flipped cinematography on its head. They achieved the 360-degree effect by editing all those images together.

In just three minutes the pair utterly wreck a well-appointed lobby full of security officers, and they do it with a dancer’s grace. Obviously that kind of action takes planning—that’s why the mayhem took 10 days to put on film.

Laurence Fishburne was the only actor who immediately understood the script

The man who would be Morpheus was one of the few people who understood the script right away. Even at Warner Brothers it was referred to as a “script that nobody understands.” Fishburne was actually surprised others didn’t get it, because so many actors spend all their time reading arcane philosophy books about the nature of existence when they’re not yo-yo dieting and buying islands and whatnot.