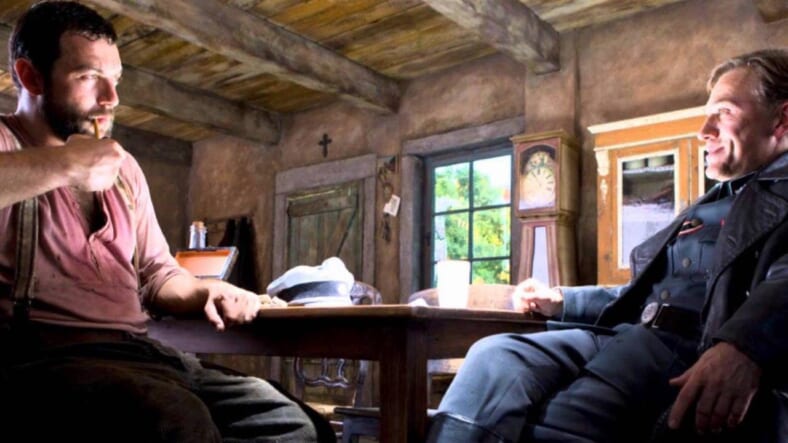 Quentin Tarantino is one filmmaker who understands the importance of getting his audience’s attention early. Who could ever forget “Pumpkin” and “Honey Bunny” from Pulp Fiction? Or the diner argument in Reservoir Dogs in which Mr. Pink (Steve Buscemi) explains why he doesn’t tip and Mr. Brown (Tarantino) pontificates on the true meaning behind the song “Like a Virgin.” Not to mention that classic nine-shot opening sequence from Jackie Brown.

While all these opening scenes are certainly amazing, QT’s greatest opener to a may just come from his 2009 World War II epic, Inglourious Basterds, which celebrates its 10th anniversary this week, and drips with tension and intrigue from the very beginning.

In an Idyllic French countryside, dairy farmer Perrier LaPadite (Denis Ménochet) chops at a stump when his daughter Julie (Lena Frierich) suddenly screams “Papa!” as a caravan carrying Nazi soldiers and SS Colonel Hans Landa (Christoph Waltz) approaches. Landa, also known by the moniker the “Jew Hunter,” is invited into LaPadite’s cottage and casually interrogates the Frenchman as his soldiers and three daughters wait outside.

LaPadite, in order to protect his family, finally concedes that he is harboring a local farming Jewish family in his floorboards. Landa then orders his Nazi soldiers to kill the family with machine guns.

This scene is so utterly effective for many reasons. For one, you can feel the absolute pure evil dripping from Landa. By definition, a Nazi is evil. However, Tarantino makes Landa come across as the most evil of the evil. It’s almost as if LaPadite is dealing with the devil himself.

Secondly, Tarantino waits close to twelve minutes to reveal that there is indeed a local Jewish family lying beneath the floorboards. He allows the tension to build and then increases the stakes that much more with this revelation. Not only is the Jewish family in grave danger, but that also means Monsieur LaPadite and his three daughters are as well.

Finally, once it is revealed that Landa knows the family is hiding beneath him, the SS Colonel maintains his composure as he then has them massacred.

However, one member escapes. Shoshanna Dreyfus runs away across the French countryside. Her escape is a great piece of foreshadowing for what will ultimately happen later in the story.

In fact, the opening in Inglourious Basterds is so good, that it is not only Tarantino’s best opening, but one of the greatest opening scenes in the history of film.

In addition to the rising tension, so many components are there in the opening that make a good story. Good vs. evil, intrigue, mystery and tragedy.

Having said that to celebrate the 10th anniversary of Basterds release on August 21, 2009,  here are 10 more of some of the greatest opening scenes in film history:

Much like Tarantino, Steven Spielberg is an absolute master of captivating his audience from the start. For Saving Private Ryan, he adeptly recreated one of the most famous battles in history. The first scene of Jurassic Park was enthralling because it demonstrated the sheer destructive power of a Velociraptor. The opening of Raiders of the Lost Ark is so good, it really needs no explanation.

The iconic scene from Jaws, however, is probably the most famous movie opening courtesy of Spielberg.

In addition to John Williams’ score racheting up the anxiety, the first-person POV of the shark, a common trope utilized in slasher films, made the scene that much more terrifying and memorable.

It also had a massive societal impact as it made an entire generation fearful of even going into the neighborhood swimming pool.

Richard Linklater’s homage to his own high school days grabs your attention immediately with the slow motion shot of Kevin Pickford’s (Shawn Andrews) 1970 Pontiac GTO cruising through the parking lot while his girlfriend Michelle (Milla Jovovich) roles a joint which is underscored by Aerosmith’s “Sweet Emotion.”

This is just the first reference to smoking pot within the barely minute and a half intro. “Slater” (Rory Cochrane) also smokes a joint with some friends while wearing a giant pot leaf t-shirt and Pickford and Randall “Pink” Floyd (Jason London) share an elaborate high five while mimicking joint puffs.

As a result, you get a pretty good idea of what one of the major themes of the film is. The opening credit sequence from Dazed and Confused also does an excellent job of introducing all the main characters quickly in a very fun way a la Fast Times at Ridgemont High.

Like Dazed and Confused, Trainspotting is a textbook case of the usage of popular music to set a film’s tone. We see Mark Renton (Ewan McGregor) and Daniel “Spud” Murphy (Ewen Bremmer) fleeing the police in a full sprint and we hear Iggy Pop’s “Lust for Life.”

Then, once again, we are given introductions to all the main players in the film. It is a motley crew as we also meet Tommy (Kevin McKidd), “Sick Boy” (Jonny Lee Miller) and Begbie (Robert Carlyle) while the boys are playing and overmatched in a local soccer contest.

All the while Renton’s famous “Choose Life” speech overlays the scene.

We go inside the car to meet the main players. There’s Henry Hill (Ray Liota) who drives, Jimmy Conway (Robert De Niro) sits shotgun while trying to get some shut eye and Tommy DeVito (Joe Pesci) sits quietly in back.

The crew is bothered by a thumping coming somewhere from the car. Did they hit an animal? ls it a flat tire?

Henry pulls the car over as director Martin Scorsese slowly pans in before revealing a bloody body that’s still alive in the trunk. Without hesitation, Tommy repeatedly stabs the man while Jimmy puts four bullets into the body.

These are definitely violent people we’re dealing with here. Henry is established as the main character with this line “As far back as I could remember, I always wanted to be a gangster,” before the credits start to roll.

The Player’s impressive intro is a continuous tracking shot that takes place across a studio lot lasting over eight minutes and the audience gets plenty of nods to Hollywood. One of which is the ubiquity of pitches on a lot during that era: “Not unlike Ghost meets The Manchurian Candidate.”

Robert Altman also slyly closes in on the front of a post card which reads “your dead” while we hear various conversations from a large cross-section of the studio’s employees. In the midst of these conversations we hear a very pertinent plot point. Griffin Dunne’s (Tim Robbins) job may be in peril.

The “your dead” post card eventually ends up in the hands of Dunne as the back of it reads: “I HATE YOUR GUTS ASSHOLE!” Not only might Griffin lose his job. His life also might even be in danger.

The intro to the Stanley Kubrick directed and adaptation of Stephen King’s novel is so simple, and yet, so memorable.

Like Jaws, the opening music and score are as important to setting the tone of the film as the actual footage.

The foreboding score and music put together by Wendy Carlos and Rachel Elkind set up an absolute feeling of dread, isolation and insignificance as Jack Torrance winds through the Rocky Mountains along with his family in their tiny yellow Volkswagen Bug on their way to the Overlook Hotel.

Another beautifully shot opening with the perfect song. Donnie Darko (Jake Gyllenhaal) is shown waking up at dusk and riding his bicycle down through Carpathian Ridge on his way home. All the while, Echo and the Bunnymen’s “The Killing Moon” sets the perfect mood in the background.

The song is mysterious, beautiful and hopeful, much like the movie itself, and gives this feel to the suburbs once Donnie makes it back in town.

Once into town, writer and director Richard Kelly does some nice foreshadowing letting the audience know that it is right before Halloween. Donnie also passes by a red Trans Am (important plot point later in the story) while Donnie’s mother reads Stephen King’s It as he wanders into the house.

Aaron Sorkin’s rapid fire dialogue reveals so much about Mark Zuckerberg (Jesse Eisenberg) in the opening of The Social Network.

Zuckerberg has an inferiority complex despite getting a perfect score on his SAT. He obsesses over being accepted to one of the elitist Harvard final clubs. He browbeats his girlfriend for asking innocuous questions and thinks the reason Teddy Roosevelt became President is because he was once a member of the Porcellian Club.

He later insinuates that they got into the bar because he incorrectly assumes that his girlfriend slept with the door guy and insults her for attending Boston University.

In the first five minutes the audience gets a pretty definitive snapshot of the character of the film’s protagonist.

The first scene of Apocalypse Now illustrates the sheer destruction of war both from a planetary and a humanitarian perspective. The audience hears the whirring of a helicopter as background din as the camera shows the desecration of what seems to be an entire forest.

Captain Benjamin Willard’s (Martin Sheen) face is superimposed, but upside down, over the devastation while Jim Morrison sings “This is the end my only friend. The End.” This is a reality where any kind of normalcy doesn’t apply.

Willard mirrors the insanity of Vietnam by drinking heavily and inexplicably doing some sort of Tai Chi in his hotel room. We hear his thoughts through voice over as he makes statements like: “Every minute I stay in this room I get weaker. And, every minute Charlie squats in the bush he gets stronger.”

A title card reading SCREAM turns from white to blood red as we hear the telephone ring.

The opening vacillates between mildly scary and fun and flirty as a cute young girl, Casey Becker (Drew Barrymore), tells the unknown caller that she’s making popcorn and is going to watch a scary movie.

She gets drawn into the conversation little by little until the caller asks her name and states the reason for this as, “I want to know who I’m looking at.” The scene further escalates as her stalker eventually declares “You hang up on me I’ll gut you like a fish! Understand?”

The scene gets more and more terrifying as the harasser continues to play cat and mouse games until she and her boyfriend are both killed by a stealthy mysteriously masked murderer–in the most spectacular of fashions.