10 Great Beers That Will Get You in the Oktoberfest Spirit 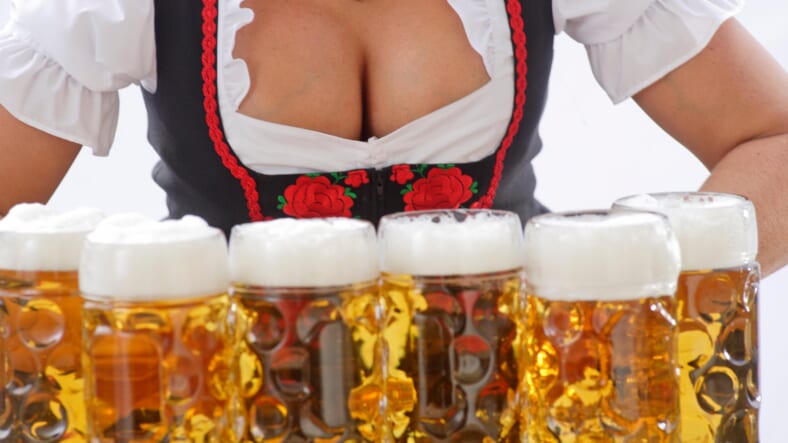 It’s that time of the year again, when people gather at picnic tables in large outdoor spaces to eat copious amounts of meat in tube form, pack their stomachs with giant salted pretzels, and drink stein after stein of beer.

Yes, Oktoberfest is upon us, the iconic German celebration that started back in 1810 when Crown Prince Ludwig married Princess Therese. If those names are not exactly familiar to you, you’re a normal person who isn’t fluent in early 19th century German royalty. So let’s talk about something more relatable—the beers you should be drinking.

There’s no better way to celebrate Oktoberfest, which kicked off in Germany on September 16, than by sampling one of the many special releases that pay tribute to the legendarily boozy festival. Some are from ancient German beer houses, while others are seasonal releases from American craft breweries.

An Oktoberfest beer is typically brewed in the Märzen style, meaning it’s malty, a little hoppy, and easy to drink. The German brewers mostly abide by the half-century-old Reinheitsgebot, or German Beer Purity Law.

This law basically says that only hops, barley, water (and yeast in more recent times) can be used to brew beer. You’ll find no pumpkin ale or watermelon lager from these purists.

Here are ten of the best Oktoberfest special releases you should be drinking this fall.

Spaten is old-school, tracing its roots all the way back to the 1300s. Since the 1920s, the brewery’s slogan has been “Lass Dir raten, trinke Spaten” (“Be advised, drink Spaten”—close your eyes and imagine Werner Herzog saying it). This Märzen-style Oktoberfest beer—which Spaten claims is the world’s first—is golden in color with a crisp, slightly toasty flavor.

This is a classic example of an Oktoberfest beer, made by a brewery that traces its roots back to Augustinian monks brewing beer and getting drunk in the 14th century. It’s light and easy drinking, but has a classic, slightly sweet, malty flavor that really shines through.

Festbier, Weihenstephaner’s seasonal lager, is meant to be enjoyed during the hard-drinking days of Oktoberfest, but tastes good even in the heat of summer. This Bavarian brewery claims to be the world’s oldest, dating all the way back to the year 1040. Festbier comes in half liter bottles, but it’s an easy drinker so don’t worry about it getting warm—odds are you will finish it quickly.

Hofbrau is a baby compared to some of the other German breweries, having gotten its start in the comparably recent year of 1589. But this beer is one of the most popular in the world, and is owned by the Bavarian state. The Oktoberfestbier is just a tad bitter with a slightly higher than usual alcohol content of 6.3 percent. And for some reason, Hofbrau just seems to taste better on draft than in the bottle.

This Oktoberfest beer is available all year round, but it’s in particularly high demand during the autumn when inebriated celebrants are looking for something to wash down sausages and pretzels. Paulaner Oktoberfest is a little bit fruity, a little bit caramel, with a touch of hops and malt.

This seasonal release from Samuel Adams is available from August through October of every year. It’s an amber colored beer brewed in the Märzen style, with a nutty, malty flavor that is supposed to pair well with sausages—appropriately so, considering the usual Oktoberfest cuisine.

Sierra Nevada is better known for its pale ales, but every year the company partners with a different German brewery for its seasonal Oktoberfest beer. This year the partner is Brauhaus Miltenberger, and the result is a traditional Oktoberfest beer that can hold its own with the Germans.

This Cleveland, Ohio brewery releases its Oktoberfest beer in late summer in preparation for the festivities. It’s another traditional style beer from an American craft brewer that uses hops from Mt. Hood and malt from Germany, resulting in a dark amber perfect for colder weather.

Don’t mess with Texas, or its Oktoberfest beer. Shiner’s version, first brewed in 1996, is on the dryer side, with a little bit of bitterness. It makes sense that Shiner does an Oktoberfest beer, though, since the Spoetzl Brewery that produces it was started by German and Czech immigrants.

This beer has been around since 2000, when Brooklyn Brewery first decided to enter the Oktoberfest fray. It’s available from August through October, and made using German malt and hops that give it a classic taste with hints of caramel and baking spices.