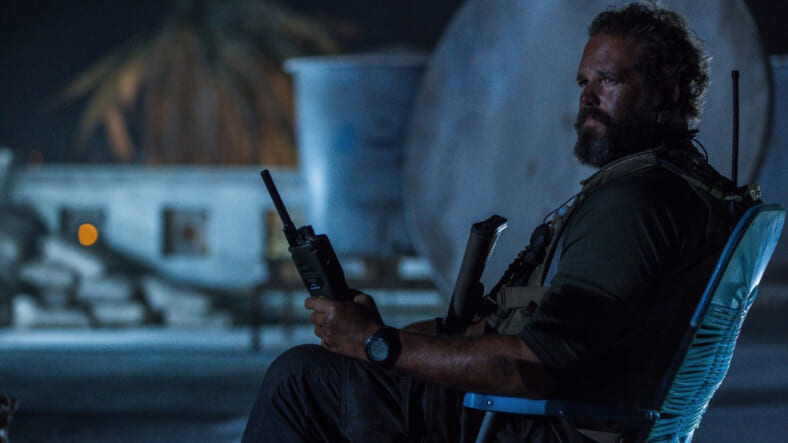 Ah, January. A month that was once (and for the most part, still is) Hollywood’s trash bin has finally found its golden goose — small-scale, character-driven modern war movies.13 Hours: The Secret Soldiers of Benghazi rides the coattails of American Sniper, Lone Survivor, and Zero Dark Thirty as the latest slice of ripped-from-the-headlines, testosterone-fueled, jingoistic fare. After the particularly rousing success of Sniper last January (it’s now the highest-grossing war movie of all time), it’s no surprise studios are doubling down on adjacent material.Directed by Michael “Transformers franchise” Bay, 13 Hours is based on actual accounts of the soldiers unfortunate enough to be stationed in Benghazi, Libya during the infamous 2012 attack on an American diplomatic compound. As detailed via on-screen text, following the fall of Gaddafi, Libya descended into chaos and became a veritable war zone. Militias and warlords ran rampant, with their allegiances entirely unclear. Many foreign embassies decided to pack up and leave, but the United States kept an embassy open in Tripoli, as well as a top-secret CIA annex in Benghazi.Why the hell stay in the midst of all that danger? Well, the CIA wanted to collect weapons from Gaddafi’s stockpiles before they made it to the black market and help guide the country’s new intelligence forces. And since even the CIA requires protection, that’s where our handful of highly-trained, incredibly skilled, and very bearded private military contractors come in. When a well-intentioned US ambassador shows up in Libya then comes under attack by militants, our heroes must do all they can to save the day regardless of proper procedure. 13 Hours keeps the action intentionally chaotic and confusing — everyone with a gun is a bad guy “until they’re not.”

Bay and the surviving Benghazi soldiers have been outspoken in the press about how the film aims to “show you what happened on the ground” and how it was literally “written with the men who were there.” This insistence on facts makes for a few exciting, hyper-realistic action sequences…but that’s about it.There’s no doubt Bay knows how to shoot action, and his collaboration here with Dion Beebe ensures the film is, at times, quite beautiful. The firefights and combat in the film are its greatest assets and feel more realistically grounded than anything he’s ever done. There are explosions, sure, but they’re explosions that could exist within the realm of possibility — Bay’s action is way more plausible when he’s not leveling entire cities. But that only goes so far.When bullets aren’t flying, the movie is full of typically quippy Michael Bay bullshit and incredibly broad strokes of characterization.We get the obligatory shots of soldiers FaceTiming their wives and families, and then more obligatory shots of soldiers FaceTiming their wives and families. At one point, a soldier holds up a picture of his twins, indicating that he misses his twins. There are a few heavy-handed moments meant to elicit an emotional response, and while plenty in the audience were drying their eyes, I was rolling mine. A film must do more than simply put stilted dialogue in a character’s mouth to make them “human,” and it also can’t rely entirely on music cues to tell the audience how to feel, which it does incessantly.While some may applaud Bay for not shoving any supermodel ass in our face for the first time since the nineties, he still manages to inject 13 Hours with an overdose of masculinity. In addition to the inherent “bro” mentality that permeates it, there’s just one (1) female character, and she’s basically just a useless rip-off of Carrie from Homeland. She is repeatedly the butt of jokes, and I can’t remember a single scene in which a man doesn’t make some sort of lewd comment that relates to her femininity. At one point, she is told “I need your eyes and your ears, not your mouth,” and that just about nails her role.The male characters have their own set of problems, mostly stemming from the fact that they’re portrayed too similarly. The actors are all so beefed up and bearded that their characters all blend together into an amorphous “ooh-rah” amoeba. There are times when a character from one location seemed to magically appear in another, and it legitimately took a second for me to figure out they were two different people.

Despite the fact that “Benghazi” is an incredibly loaded word, Michael Bay insists the film has “no political agenda.” Keep in mind, however, that this is the same guy that claimed he was done making Transformers movies in 2011. Sure, neither President Obama nor Hillary Clinton are explicitly mentioned, but even this can be read as meta-commentary in itself. The omission of any real authority figures during such a harrowing time is pretty glaring, and the script isn’t afraid to point the finger at the CIA’s ineptitude and the lack of US response repeatedly.

All that aside, the film is still at least 30 minutes too long, with plenty of material that could easily be excised without compromising the actual story. There’s 40 minutes of set-up before the attack starts, and it’s all so perfunctory that the details become meaningless. Bay’s quasi-restraint apparently doesn’t extend to running time, and the film’s pacing is beyond laborious; a movie that aspires to be intense shouldn’t be so boring.

For those hoping 13 Hours would mark the start of a career revival and return to hard-“R” form for Michael Bay, sorry — he’s already retreating back to his comfort zone with Transformers 5 next year.