The 20 Best ‘Not-Quite’ Christmas Movies of All Time, Ranked

These are the greatest holiday movies that completely ignore the holidays. 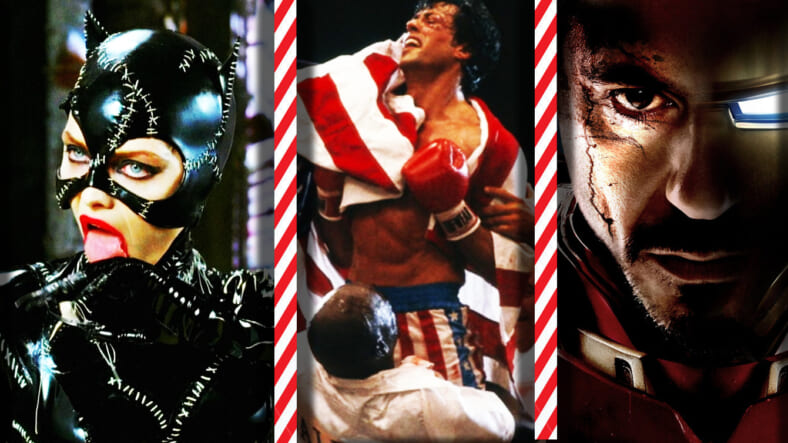 Just because a movie invokes Christmas as a backdrop, setting or timeframe doesn’t make it a Christmas movie. We’ll leave those traditional turds to Lifetime.

Instead, check out these twenty film gems that aren’t exactly Christmas movies, but use the holidays for their own wonderful and (almost always) devious purposes.

Christmas figures into this one more as a plot device than a backdrop but we’ll take it nonetheless, especially if it’s a prop for the Will Ferrell shenanigans we love. No one in their right mind would spend tens of thousands of dollars to buy children’s love with Xmas presents but, then, no one would pelt cheerleaders or handicapped kids with basketballs either. Except Ferrell.

Less about being home for the holidays and more about madcap family interactions, burglary and blackmail, The Ref is a rare movie where Denis Leary takes on a starring role and actually nails it. Plus, someone coldcocks Santa in this one. What’s better than that?

Based on a heartbreaking novel, Robert Downey Jr’s first appearance on this list is less about going home for Christmas and more about the cautionary tale that addiction leads to male prostitution that leads to death. It’s a sobering movie that’s about as far from feel good as you can get, and that makes it perfection for its not-quite Christmas status.

Tim Burton’s early collaboration with Johnny Depp holds up in a twisted way, thanks mainly to the juxtaposition of cheerful suburbia and Burton’s dark, macabre vision of a boy with scissorhands turning it upside down. The story’s climactic moments take place with Christmas as the backdrop and guarantee you’ll never look at snow the same way again.

Sporting a huge cast of recognizable faces before they hit it big, Go’s tale of a drug deal told three ways is hilarious and manic and all set during the lead up to Christmas. Go is a reminder that the holidays might not be the best time to piss off drug dealers or pop E in Vegas. (Actually, that’s probably sound advice all year round.)

The rare movie that blatantly invokes Christmas while simultaneously having abso-fucking-nothing to do with the holiday itself, Reindeer Games is largely a terrible heist movie, jam-packed with nonsensical twists and doublecrosses. Thankfully, it also stars a young Charlize Theron naked in a pool. Fun fact; Affleck’s character’s name is Rudy, as in Rudolph, as in the red-nosed reindeer. Because the name of the movie is Reindeer Games. That’s pretty much as far as they cared to take the metaphor though. Damn, this movie is so bad that it’s actually good.

We’re not gonna lie, we didn’t know shit about Krampus but, when colleagues found out we were working on this article, they insisted it belonged so we immediately found a copy to watch. Adam Scott’s role is a high point here as this anti-Christmas horror movie invokes Krampus, a demon from Austrian mythology that’s categorically opposite of St. Nick, and the reason we secretly judge the Austrians.

Downey Jr’s second outing on this list is the very mediocre Iron Man 3, and part of that mediocrity comes from the fact that RDJ spends most of the movie without the suit, stuck in a small town. Oh and inexplicably, unnecessarily and rarely even referenced, it’s Christmastime. Yeah, we didn’t get it either, but the movie ends with an all out ragefest that pits a few dozen Iron Man suits against an army of pyros and totally redeems itself.

A suicide hotline on the verge of bankruptcy, a serial killer on the loose, a cross-dressing Liev Schreiber and Adam Sandler on a ukulele all set in LA… on Christmas eve. Mixed Nuts bombed in theaters despite its noteworthy cast, but should absolutely be watched during the holidays because it’s fucking bonkers, darkly funny and will make your own crew of family and friends feel sane by comparison.

Starting out with a thief in the midst of his pre-xmas cash and toy grab and quickly traveling to L.A. for a mistaken identity murder mystery, RDJ’s third appearance on this list (who knew this guy was in so many non-Christmas Christmas movies?) is a great movie in its own right and was one of the signals of Downey’s career renaissance.

We’re pretty sure Die Hard 2 only invokes Christmas because the filmmakers understand that nothing will drive a man to racking up a body count faster than being in an airport on Christmas. John McClane’s second outing doesn’t have the same iconic moments as his first, but Die Hard 2 remains a permanent not-quite Christmas classic in our book.

The Eddie Murphy/Dan Ackroyd ’80s classic is set squarely in the holidays and actually pays more attention to Christmas thematically than many of the movies on this list. Still, you’d be hard-pressed to call a movie about rags to riches and riches to rags, a forerunner of insight into the 1%, a Christmas movie. So we won’t and we’ll add it to this list instead.

Irish hitmen, accidental murders and crimes gone awry, not even the church is safe in this dark, dry comedy timed against the holidays. In Bruges has cult status in many ways, marking a high point in Colin Farrell’s career for many fans and hits none of the notes of a Christmas movie at all. So it’s great.

Another movie set in the Christmas season in L.A. where it never actually feels like Christmas. The hard-boiled murder and conspiracy movie follows three detectives with their own brand of justice working in an increasingly corrupt city. Christmas is barely referenced here.

The good cop, crazy cop formula started here. Borrowing from the yuletide cheer whenever it’s convenient, Lethal Weapon is, first and foremost, concerned with laying down tropes for the buddy cop genre, the fact that the movie opens on a dead hooker with Jingle Bell Rock playing in the background is a testament to its priorities.

Because of this movie, we know that mistletoe is deadly if you eat it. We also learned that we love Michele Pfeiffer and have a patent leather fetish. The Christmas-in-Gotham setting found here is infinitely less memorable than anything else in the movie, especially the way Pfeiffer’s Catwoman bathes herself and Danny DeVito’s penguin drools black blood. Thanks for the emotional scarring, Bats.

We don’t know a better way to celebrate Christmas than entirely ignoring the holiday season, spending time training in Russia with logs and then punching the daylights out of the Ruskie who killed your best friend. All on Christmas Day…. while your family is half the world away. Presumably the entire world has also forsaken the celebration of baby Jesus in Rocky IV’s world, instead opting to watch as two dudes duke it out as a means of ending the Cold War. That’s a world we want to live in.

Creepy critters run amok while Christmas is quietly forgotten. Gremlins is a pinnacle not-quite-Christmas movie and one that we’re happy has resurged lately, refocusing attention on the demonic little bastards in a nostalgic way that’s long overdue.

Die Hard is THE not-quite-Christmas movie, occasionally dipping its toe in the holidays, but remaining much more concerned with those same toes walking barefoot on broken glass. One of the all-time best action movies in its own right, Die Hard tops this list because it perfectly abandons any pretense of holiday almost immediately, in favor of a laughably high bodycount and snarky quips about dead henchmen. Who needs ho ho ho when you have yippee ki yay?