The 20 Greatest Horror Movies of the 21st Century, Ranked 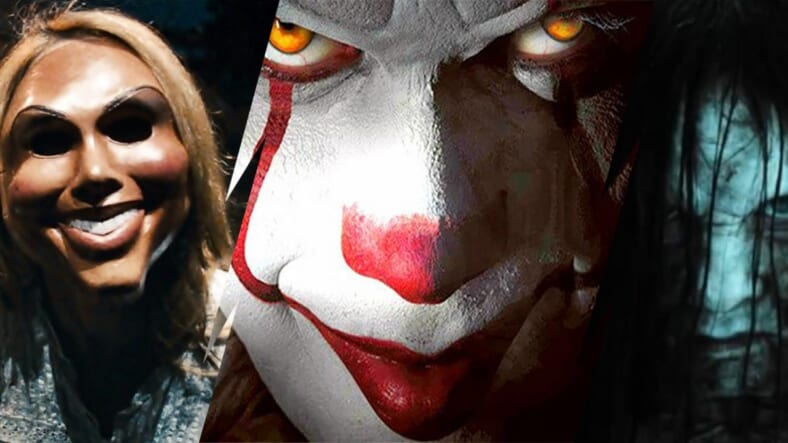 What’s October without the non-stop binging of horror movies? Get ready for Halloween by checking out the best horror the 21st Century has to offer.

A masterpiece of horror on a budget, Paranormal Activity scared the hell out of audiences and was incredibly well-crafted considering its $15,000 cost. Later sequels in the series may not adhere to the original’s spirit, but that doesn’t undermine how it scared us back then.

As if childbirth wasn’t horror enough, Inside takes grisly to an entirely new level and will stick with you as a nightmarish scenario that takes kidnapping to an extreme. Like the warning on a liquor bottle; this one is hazardous for pregnant women.

Chris Hemsworth’s breakout film is also a smart, scary send up of the horror genre. A must-see for fans of the typical tropes, Cabin is easily the most meta movie to make this list, and might also be the most fun to watch.

The second most recognizable movie to take place in 12 Mile, the premise found in this movie is one that will stick with you long after the credits roll. The scenery itself lends a heavy sense of despair to the flick, but the trust-no-one plot will have you doubting everyone you know.

The rare horror movie with an all-female cast, The Descent is a visceral, claustrophobic romp against monsters in a cave. Character depth is at an all-time high here for the horror category, connecting you to the unfortunate squad as danger rears its ugly head over and over.

This mockumentary, set in a world where the likes of Freddy Krueger actually existed, follows a youth who wants to be the next great serial killer. Chock full of cameos and awesome behind-the-scenes moments that you rarely see from unstoppable killing machines, this is one that horror fans should not miss.

Preying on those childhood fears of monsters under the bed or in the closet, The Babadook is an Australian film that toes the line between cheap scares and legit drama, all with a healthy heaping of the boogeyman.

Set in New England decades before the Salem Witch Trials began, the foreboding is strong with this one as a family travels into exile in the woods and are overcome with some of the most base human evils.

Taking advantage of our childhood nostalgia for the ouija board itself, we liked Origin of Evil’s tale of scam seances more than its predecessor. It may employ more of the modern horror tropes for cheap thrills than others on this list, but there’s nothing wrong with the pants-peeing scares found here, cheap or not.

The terrifying dystopian world in The Purge is one that’s hard not to think about actually existing. Who hasn’t thought about murdering their neighbors or how they’d survive if they were thrown into a battle royale? It’s not a new premise, but we love The Purge for doing it right and killing it with an awesome cast, headlined by Ethan Hawke and Lena Headey.

Biting from the Asian original, The Ring takes a solid premise and runs with it, simultaneously creating iconic horror moments and nightmarish characters that have made their way into pop culture. If nothing else, it made us think twice about using VHS tapes.

Another modern horror movie that has quickly turned into an iconic franchise, Jigsaw is a character we’ve all come to fear and love. The twisted implementations of torture that have become the hallmark of the Saw series are a wonderfully terrible addition to the horror category.

Guillermo Del Toro’s parallel horror movie complement to Pan’s Labyrinth, The Devil’s Backbone is also set against the Spanish Civil War only. Where the former was a mystical adventure in the fantastic, the latter is a somber and frightful confrontation of personal terrors.

Jordan Peele’s first attempt at social horror is surely going to lead to a string of new movies in this vein. For now, we’ll marvel at Get Out as an extraordinary accomplishment in uneasiness, constantly keeping the audience in a state of apprehension and keeping that feeling going well after we left the theater.

A revisit to the zombie genre that wound up being extremely satisfying, the isolation that starts the move is dwarfed in its frightfulness only when juxtaposed against being overwhelmed by a zombie population that far outnumbers you and moves really fast. The highly stylized approach suits the U.K. setting, and we give it credit for reinvigorating the world’s love for zombies that has led to shows like The Walking Dead and parodies like Zombieland.

Playing on all of our fears of the unseen, barns and the ’70s, The Conjuring is modern supernatural scary at its finest, doing a damn good job of keeping the audience in suspense from start to finish with great performances from its cast.

Combining children with the supernatural is a horror staple, and Insidious does it extremely well, creating a horrifying situation with a twist you can’t turn away from. (Doesn’t hurt that Rose Byrne turns in a terrific performance either.)

Eli Roth’s breakout movie is one that captivated audiences as much as it made us think twice about backpacking in Eastern Europe. One of the goriest flicks on this list, Roth made a name for himself as a filmmaker who pulls no punches when venturing into gratuitous violence.

Even though it’s titled like a Tyler Perry morality tale, Let the Right One In is much more sinister. Wonderfully shot and beautifully twisted in its premise, it’s a vampire movie at heart but with so much more…well…heart. Aptly described as perverse and subversive, we’ll take both for the No. 2 spot on this list.

Stephen King’s horror masterpiece is still currently in theaters, tearing up horror box office records on a daily basis. That might feel too soon to put it atop a list like this, but IT is a remake and Pennywise has haunted us since childhood. Any movie that could make an entire generation scared of clowns deserves our high praise.