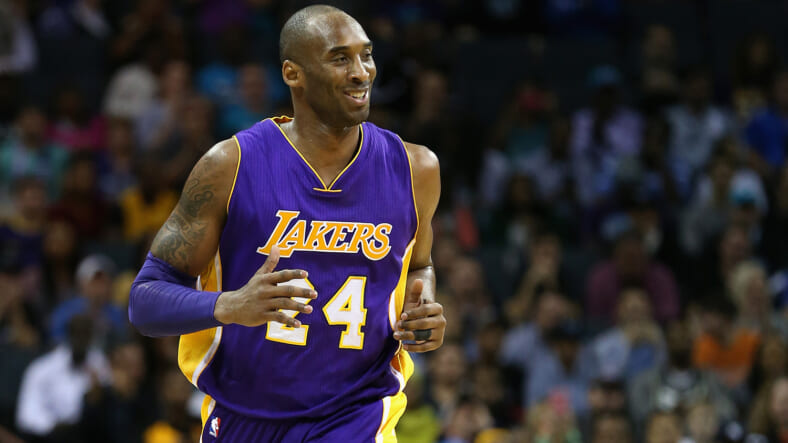 The NBA announced the All-Star starters on Thursday night, and headlining the roster is Kobe Bryant, an All-Star for the 18th time amid the worst season of his career. Don’t get hung up on that though: the NBA All-Star Game is an exhibition that’s more popularity contest that confirmation of greatness. And it’s not just Kobe’s presence in the starting line-up that confirms this. Along with young, deserving studs, the starting line-ups are full of aging superstars.

Here are the 10 players who’ll be on the floor February 14 when the All-Star tips off in Toronto.

Your 2016 Western Conference @nbaallstar Starters (as voted by you)! #NBAAllStarTO

Stephen Curry — The NBA’s reigning MVP and leading scorer is the easiest choice for All-Star starter in the league. What’s scary about the 27-year-old sharpshooter is that he’s only getting better: seven years into his career, he’s averaging highs in field goal percentage, rebounds and steals.

Russell Westbrook — Another point guard and a reminder that this is the All-Star Game and positions don’t matter. Westbrook is having a characteristically fantastic season, leading the league in steals, second in assists, seventh in scoring and third worst in turnovers. He’s a stat stuffer—even the bad ones.

Kawhi Leonard — Charles Barkley recently said the Spurs wing is the best player in the league and it was one the sanest things Sir Charles has said in years. He’s wrong, of course—the title belongs to Curry—but Leonard is not far behind. He’s the league’s best defender and offensively, he’s got a chance to become only the seventh player to put a 40-50-90 season in NBA history.

Kevin Durant — Crazy to think that KD is only 27. He’s already an eight-year vet whose consistent excellence is a foregone conclusion. Enjoy him while you can OKC fans, you’ve got half a season left.

Kobe Bryant — The leading vote getter with 1.8 million ballots cast in his favor, Kobe is having an awful season. But whatever. He’s a Hall of Famer who deserves to be feted one last time on All-Star Weekend. Don’t think he’s just going to bask in the glory though. Kobe’s tied with Michael Jordan for the all-time All-Star steals record. You can bet his bloated salary that he knows that.

Your 2016 Eastern Conference @nbaallstar Starters (as voted by you)! #NBAAllStarTO

LeBron James — This will be the 12th All-Star Game for James and his 12th time as a starter. The only time he didn’t make the game was as a 19-year-old rookie. By the time he’s done, expect his name to be at the top of every one of these lists.

Paul George — After missing all but six games last season with a nasty broken leg, George has had a remarkable comeback season. He’s averaging a career high in points and steals and as this dunk back in October proves, he’s fully healthy once again.

Kyle Lowry — The All-Star Game is in Toronto this season, so the Raptors point guard benefitted from some home cooking. Not that he’s undeserving—according to ESPN, Lowry is one of two players in the Eastern Conference putting up 20 points, five rebounds and five assists per game. LeBron is the other.

Dwayne Wade — If Kobe’s inclusion as an All-Star starter wasn’t reminder enough that the game is about honoring stars and not recognizing stats, Wade’s should be. The 11-time All-Star is having a fine season but he’s the third best player on his own team. He does make a lot of commercials though.

Carmelo Anthony — Another superstar who’s having a good but unspectacular year, Melo got his starting nod because of his name and not his numbers. Hard to be mad at that though. Carmelo is a damn good name.