Here’s everything we know about the new show. 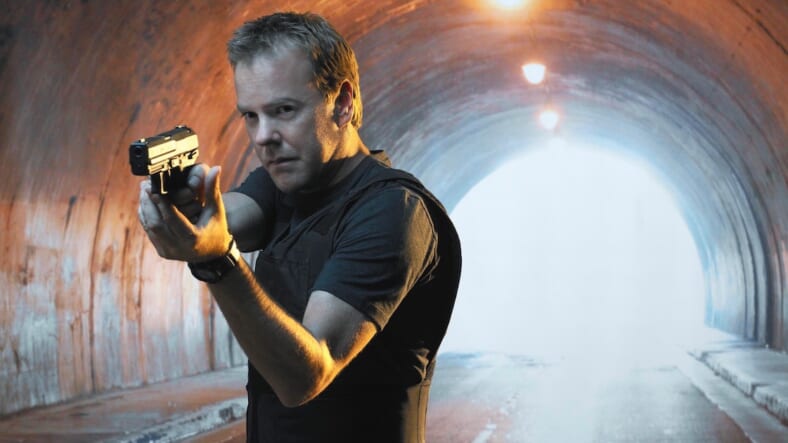 FOX is developing a 24 prequel series, which would delve into counter-terrorist operative Jack Bauer’s origin story.

Sources told The Hollywood Reporter that original series creators Joel Surnow and Bob Cochran are currently working on the concept, and executive producer Howard Gordon is also said to be back on board.

They are reportedly aiming for an ongoing series, not like limited series 24: Legacy and 24: Live Another Day.

It is still too early to say when Jack Bauer will be brought back, but Deadline speculates that star Kiefer Sutherland will most likely not return.

“Sutherland had indicated that he might be done playing the physically demanding role of Bauer, who’s always on the run, putting his his life on the line to thwart another terrorist threat,” Deadline wrote.

“Doing a prequel would allow Fox to bring back a beloved character without putting Sutherland through the grind of an action drama series again.”

The Hollywood Reporter adds that the prequel will preserve the “tickling clock” setup but that it would likely not focus on the Counter Terrorist Unit (CTU) but rather on a different government body.

While plenty of people who loved the wildly popular series are probably happy to check out a 24 prequel, not all fans are totally pumped for it.

I love 24. I have always loved 24. Honest to God, I truly believe that 24 will be remembered as one of the most important television programmes in the history of the medium. Look around now, at this landscape full of colossally expensive series that brim with big-name movie stars. It’s all thanks to 24. I believe in 24. I love 24.

That said, they should absolutely not make any more 24. Absolutely not. Never, ever, ever. CTU, ticking clocks, the entire concept of a soft perimeter; all of it should be parcelled up with packing tape and kicked into an active volcano. I say this with nothing but affection. But, guess what: there is probably going to be more 24. Creators Joel Surnow and Bob Cochran are reportedly in talks with Fox to make a 24 prequel series. If everything goes to plan, there will soon be a brand new, open-ended story about how a young Jack Bauer became the clench-jawed super-patriotic pro-torture superhero we all know and love.

Forget the fact that it might conceivably work. Forget the fact that 24 has hinted at Bauer’s past enough times to root the series in believability. Forget the fact that there’s something immediately irresistible about a show where an idealistic special ops soldier attempts to put the corrupt legacy of his wealthy family behind him by winning the Purple Heart in the ravages of the Yugoslav wars of the 1990s. Forget all of that, because it just shouldn’t happen.

Where do you stand on this important issue?