The ultra-influential drug lord classic is marking its 35th anniversary. 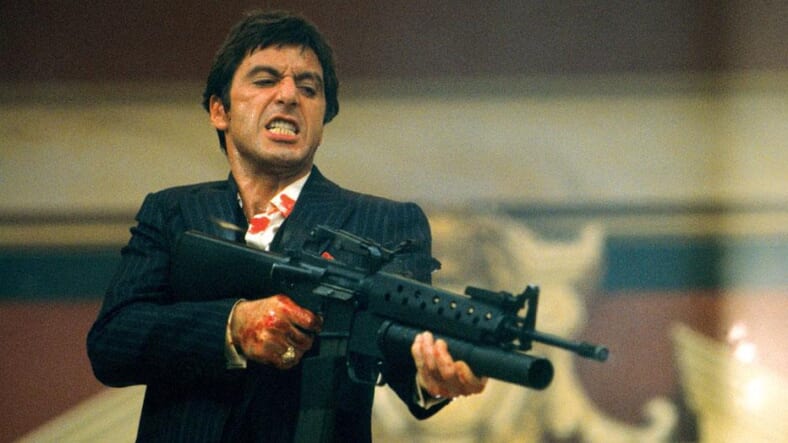 Scarface officially turns 35 this year, but it already seems immortal. The coke-fueled classic famed for Al Pacino’s over-the-top portrayal of Cuban-born kingpin Tony Montana seems timeless, in part because 99% of dorm room walls have at some point in recent history been adorned with Pacino’s face, and rappers have been name-checking Brian De Palma’s 1983 masterpiece for years, among other cultural benchmarks.

Several cast members recently reunited for a screening of the movie at a New York film festival, and it got a little weird. The reunion’s moderator asked how much Michelle Pfeiffer weighed (see below), cast member Steven Bauer may have been a little lit, and craziest of all, Al Pacino was one of the calmest, most collected people in the room.

Here are 35 Scarface facts you probably didn’t know about the most iconic movie to ever feature Al Pacino killing everyone with a machine gun.

2. Scarface was originally rated X. In 1983, a movie could get slapped with an X just for excessive swearing and graphic violence. Director Brian De Palma repeatedly edited the movie to change the rating. Universal appealed and the MPAA finally gave it an R.

4. Pacino was injured while handling the machine gun. That’s right, the method actor was willing to bleed—actually, burn—for his art. He grabbed the barrel of the weapon and the burn had him out of commission for weeks.

5.Robert De Niro almost played Tony Montana. Apparently De Niro wasn’t ready for all those mountains of coke and Pacino got the nod instead.

6. Martin Scorsese knew critics would hate it. Steven Bauer (Manny Ribera), said Scorsese told him “be prepared, because they’re going to hate it in Hollywood.” They did, and Scorsese knew they would, he said, because it was about Hollywood.

7. The movie has a John Wick-level kill count. Forty-two people, everything from guns to overdosing on cocaine. ‘Nuff said.

8. One actress with a small role vanished after the movie. Tammy Lynn Leppert had a bit part flirting with Steven Bauer’s Manny. Sadly, she later became more famous through an Unsolved Mysteries episode about her mysterious disappearance. Leppert was allegedly mentally unbalanced and even freaked out on the set.

11. It’s a remake of an old-school gangster classic. Okay, this isn’t the biggest secret. Pacino’s Scarface was semi-sorta based on the 1932 movie with the same title. There wasn’t nearly as much coke in the first one.

12. The word “Scarface” appears only once in the script. It’s a little corny to use a movie’s title in the dialogue anyway. The screenwriter evaded corniness by having a character say “cara cicatriz”—the same word in Spanish.

13. That horrible chainsaw scene was based on real life. Oliver Stone embedded with the DEA for research. That’s how he learned of a real drug kingpin who dismembered a snitch with a chainsaw then burned the body.

14. Pacino’s method of getting in character was surprising. He really went whole hog into learning Spanish. He asked one crew member who knew the language to never use English. We don’t know about the coke and murder elements.

15. Director Brian De Palma has a cameo in the movie. Well, kind of. In the scene before Tony is shot at the Babylon Club, a closeup reveals De Palma’s head in the mirror behind him.

16. Tony Montana was based on Al Capone. That’s not an unknown fact. But there were plenty of differences. Tony’s death in a hail of bullets, for example, was far more dramatic than Capone’s slow death from dementia.

17. There was probably real coke on set. Look, it was 1983. And in the DVD commentary track, De Palma totally sidesteps the question as to whether real blow was involved in some scenes.

18. Steven Spielberg directed a scene. The E.T. director visited the set and ended up directing a scene in which a henchman scales the outer walls of Tony’s home.

19. The cursing isn’t random. Answering a question about the movie’s 226 uses of “fuck” alone, Pacino said “Bombast was part of what we were trying to say in the movie.”

20. “Say hello to my little friend” was in the script. That may seem obvious, but many famous lines in  other movies have been so great because they were improvised. Oliver Stone wrote that line and Pacino’s delivery made it memorable.

21. Pacino claims making the movie was his idea. He was a big fan of the 1932 film, and says he immediately saw remake potential after watching it.

22. Michelle Pfeiffer wasn’t Pacino’s top choice for Elvira. She wasn’t very well known at the time. In a talk about the film the actor once admitted he “probably would’ve said no” to her casting.

23. The cast and crew of Scarface were surprised at its success. But they also knew they had something special going on, due to the kind of intense rehearsal usually reserved for stage plays.

24. There’s a big-budget remake on the way. That’s not the most surprising fact, though. The surprising part is that Pacino is totally down with it; he doesn’t claim ownership of the role at all.

25. Pacino is also pretty happy that rappers love it. Regarding the Scarface love from the rap community, the actor has said he’s grateful to them for keeping the movie alive.

26. BUT…Brian De Palma didn’t want rap music in the re-release. For the Scarface re-release in 2003, De Palma was asked to change up the soundtrack to Scarface-inspired rap. He refused.

27. Steven Bauer may have been second choice for Manny Ribera. The first choice? John Travolta. Yeah, no.

28. Saddam Hussein was a fan. How random is that? But yeah, Hussein laundered money through Montana Management, and the name was apparently inspired by the movie.

29. Oliver Stone’s inspiration for Tony’s name was NFL-related. He was a fan of legendary QB Joe Montana.

30. Tony definitely wasn’t “woke.” Montana uses the word “maricón” throughout the movie. That’s a Spanish slur for homosexual, equal in offensiveness to the English word that rhymes with “maggot.”

32. Oliver Stone said the movie’s success was all about timing. In 2015, Stone said, “Scarface was definitely on the money, it was right on. It was exaggerated, but it was close to the truth and nobody got it at the time. Miami Vice plunged in right where we (left off). Michael Mann saw it right away, he told me that.”

33. Brian De Palma quit another movie to direct. That movie? Flashdance. What a feeling!

34. The original chainsaw scene was too grisly to be shown. The chainsaw scene was already pretty intense. It originally contained a shot of a dismembered arm. That was the only thing De Palma had to completely cut from the final print.

35. Grand Theft Auto Vice City is packed with Scarface references. Two examples: The story structure is the same. Both are about a small-time hood who becomes drug lord. And the Malibu Club is almost identical to the Babylon Club in the movie—including songs from the Scarface soundtrack.