5 Reasons Why You Should Go See Sicario on Opening Day

This intense drug war thriller will keep you on the edge of your seat the entire time. 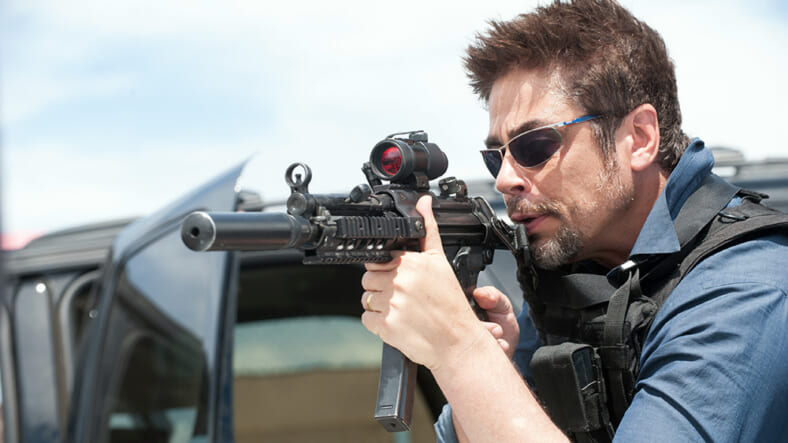 Emily Blunt stars as Arizona-based FBI agent Kate Macer, a young workaholic who we meet in the opening moments of the film as she’s leading a SWAT team on a raid looking for hostages. What she uncovers is linked to a menacing drug cartel in Mexico; mysterious government contractor Matt (Josh Brolin) sees potential in her and brings her on board to his team attempting to bring down the cartel, a team which includes the film’s eponymous hitman, Alejandro (Benicio del Toro). Macy soon realizes she’s become involved in something far more nefarious and far-reaching than she could’ve ever imagined.

Sicario is out in select cities on September 18th and opening for wide release on October 2nd. Here’s why you should get your tickets ASAP:

1. This is Emily Blunt’s best film role yet.Emily Blunt’s beloved for her affable comedic roles, but it’s her portrayal of Kate Macer that demonstrates her incredible range as an actress. Despite the character’s steely reserve, she manages to channel serious inner turmoil — as she slowly starts realizing she’s in deep shit, it’s impossible not to empathize with her.

2. While we’re at it, Benicio del Toro and Josh Brolin are pretty damn good too.
Let’s just give it up for the Sicario casting director. Everyone’s just spot-on in this movie. Josh Brolin’s run as the chill bro Matt — a guy who wears flip flops and speaks with a syrupy Southern drawl but could very well kill you with his bare hands — is pretty much exactly what you imagine a morally corrupt government contractor is like. And Benicio del Toro was at peak Benicio del Toro: strong, mostly silent, and really fucking terrifying.

3. The drug war plotline is inherently interesting.The drug war and surrounding fallout are catnip for filmmakers, and with good reason: it’s catastrophic, it’s happening close to our border, and it’s filled with unimaginable brutality. There’s also a built-in tension —  most movies and TV shows about the subject toy with the idea of a moral grey area in regards to how to deal with the drug cartels. Sicario is no different.

4.  But what it leaves out is ultimately more impactful.
Don’t get us wrong — if you’re looking for action, there are plenty of machine gun shoot-outs in Sicario. But in lieu of gratuitous violence and gore often used in this genre, the film often takes a more elegant route and leaves certain things unseen. It’s those off-screen, hinted-at torture scenes, for example, that makes it all the more eerie.

5. It’s the most intense thriller you’ll see this year.
There is no point during Sicario where you feel like the characters will emerge from the situation unscathed. It’s so tightly written that even moments that should be a fun reprieve — Kate going out for after-work drinks, for example — provide yet another opportunity for more danger. I’m pretty sure my inner monologue the entire time I was watching it was “holyshitholyshitholyshit.” It’s unsettling in the best way.