You need to know these facts about “the greatest action movie of all time.” 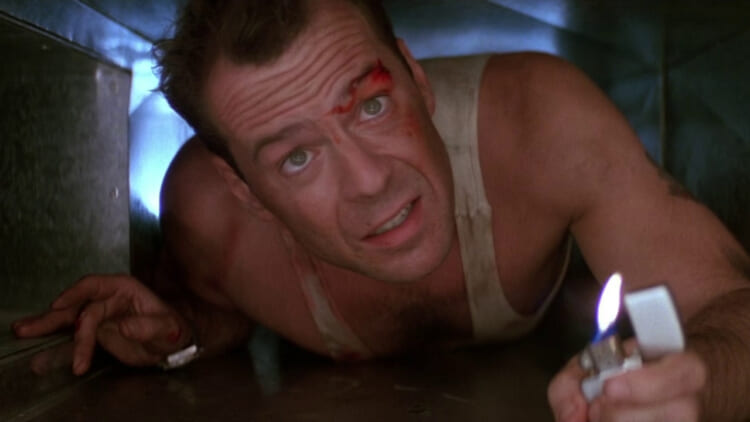 In case you haven’t downloaded your copy of the Amazon Kindle Single Die Hard: An Oral History yet (seriously, what’s stopping you?), it’s a really fascinating read, as far as reading goes, anyway. Author Brian Abrams manages to put 40 studio execs, producers, and cast members into headlocks and get their stories about the making of what’s arguably the greatest action movie of all time — not to mention details about Bruce Willis’ origins as a Manhattan bartender and the famously toxic relationship between action movie moguls Lawrence Gordon and Joel Silver, who collectively are responsible for 48 Hrs., Lethal Weapon, Predator and The Matrix.

But, again, you’d have to hop down that elevator shaft on your own to get the gist of it. There’s really too much in here to share, but read our lazy laundry list of five items that we had no idea about, thanks to this engaging e-book of 21,000 words.

“Bruno,” as patrons at Manhattan’s chic (and now-defunct) Café Central on the Upper West Side, used to play the harmonica in between shaking tumblers and would rub elbows with future big-screen colleagues. “Bruce was no punk,” says Café Central owner Peter Herrero. “He knew where he was going, and he wouldn’t let things get in the way. I never called him ‘Bruno.’ I just called him ‘Bruce.’ He was funny. I didn’t try to make people who worked for me into somebody else.”

2. The script for ‘Die Hard’ was based on a depressing book from the 1970s called “Nothing Lasts Forever.

And the hero in Roderick Thorpe’s humorless novel was a 48-year-old retired cop named Joe Leland who was going to visit his daughter in Los Angeles for her company’s Christmas party. (Unlike when John McClane saves his wife at the end, in the book the daughter ends up falling off the roof with the head terrorist.)

3. The screenwriter dreamed up the character of McClane after he had a near-death experience.

Writer Jeb Stuart got in a fight with his wife after leaving the house to write the script when, suddenly, on the L.A. freeway he thought he had met his maker. “As I was driving down the 134, that’s when a Frigidaire box fell out of the truck in front of me,” Stuart said. “I can still imagine my heart stopping … but the box was empty. It flattened. I pulled over to the side of the road, and suddenly I thought, “I know what this movie is.

“It’s not about a 65-year-old man whose 40-year-old daughter gets dropped off a building,” he continued. “It’s about a 30-year-old guy who should have said he’s sorry to his wife, and then bad stuff happens.”

Casting director Jackie Burch recalls multiple conversations with producers about how director John McTiernan wanted Duvall to play the jovial walkie-talkie counterpart to McClane. “I’m in there saying, ‘I’m the only woman in the room, and I’m telling you it’s Reginald VelJohnson. He’s someone I’ve hired before. He’s the nicest man you’ll ever meet, and you need him just the way Bonnie Bedelia is an asset for Bruce.’ Everyone around Bruce just grounded him more because, you know, he could be cocky … So having her on one side and Reginald on the other was really good chemistry and the right match for Bruce.”

McTiernan doesn’t remember pushing for Duvall: “I think I was hoping for Larry Fishburne.”

5. Willis thought his movie career was over, but his agent ended up making an unheard of $5 million deal.

Willis was kinda on the down-slope of his starring role in the ABC series Moonlighting. He had one movie under his belt, Blind Date, which did well at the box office (March ’86), but critics hated it. And he was working on his second movie at the time called Sunset, which everyone in the hallways of TriStar referred to as a “career-tainting bomb.” But Willis’s agent Arnold Rifkin was able to land an amazing deal for his client, because all the other leading men in Hollywood thought the script for “Die Hard” was just another forgettable shoot-em-up.

Read about the negotiations between Rifkin and 20th Century Fox, among other unknown gems, in Die Hard: An Oral History at Kindle Singles.