5 “Star Wars” Characters Who Don’t Deserve Their Own Movie

If they’re making spin-offs about any of these guys, count us right out. 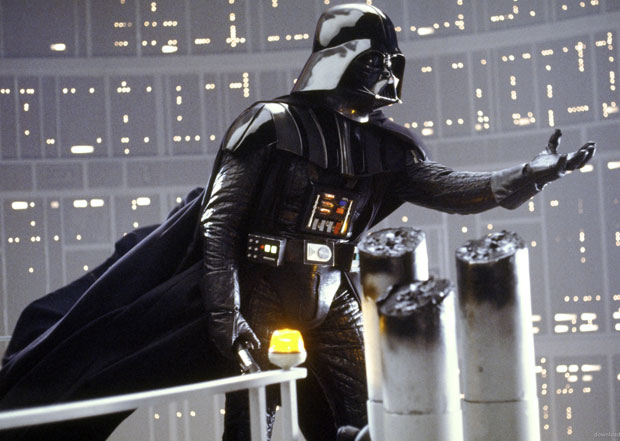 Rumor has it that J.J. Abrams’ new Star Wars movies will follow known characters from the established cinematic universe, and give us their backstories and/or further adventures. Which sounds like fun, but not if it’s any of these guys…

Dr. Cornelius Evazan was the guy with the squishy face who tried to start a barroom brawl with Luke Skywalker, using the immortal words, “He doesn’t like you. I don’t like you either!” Now, for someone who brags to be a wanted man, he seemed awfully brazen about hanging around the bar of a spaceport full of Imperial troops, but hey, you don’t get the death sentence on 12 systems without being a little bit crazy. It might’ve been fun to see the Toxic Crusader lookalike get his own movie, running around the Star Wars universe, starting fights, getting in trouble, and generally acting like a belligerent asshole, but considering how fast the fight went out of him when Kenobi sliced off his buddy’s drinking arm, it’s likely that the movie would be over before it even began. That’s the trouble with intergalactic serial killers these days – all talk and no genocide.

Willrow Hood [The Empire Strikes Back]

If you ever happen across Wookieepedia (the Star Wars-themed Wiki site), you’ll discover that a lot of characters with nothing but a single line of dialogue – or even just an interesting costume – have had lengthy backstories written for them (you will also learn depths of sadness hitherto unrealized). Willrow has neither of these things: He is simply a dumpy extra in an orange jumpsuit that runs past the camera during the evacuation of Cloud City. If you click that link, you’ll see him appear at the 12-second mark, completely disappearing two seconds later. A few decades later, “hilarious” people on the internet decided that his prop looked like an ice cream maker, and thus, the legend of Ice Cream Maker Guy was born. Hardcore Star Wars fans, however, decided that it was unacceptable for people to make jokes about a movie series revolving around space-wizards, and wrote him a heroic backstory. Amazingly, his popularity has endured to the point where it is now possible to buy an action figure of the guy, which is just immensely depressing. According to his Wookieepedia entry, he played a pivotal role in the taking back of Cloud City from the Empire, but afterwards, not so much. This is an exact quote from the end of the article: “After the Rebel’s victory, Hood decided to take it easy”. That’s right – he just kind of…hung out. Now that’s imagination in action! A whole movie of Willrow hanging out at home in his underpants, feet up, watching Sports Center and eating gallons of homemade ice cream would still not be as bad as Revenge Of The Sith, but it’s a film we could probably live without.

Malakili [Return Of The Jedi]

Better known as the tubby guy with the towel on his head who weeps when Luke kills his pet Rancor, Malakili later went on to open a restaurant on Tatooine called The Crystal Moon. Again, that last part is according to Wookieepedia, so take that with a massive grain of salt from the bottom of a jumbo size bag of Cheetos. Now, as background characters go, Malakili isn’t the worst choice for a spin off movie – after all, he lived in a dungeon with a giant, man-eating monster. Surely Malakili: The EarlyYears could be badass? Picture it: An underground gladiator school where prisoner is pitted against beast in a battle to the finish! Unfortunately, Malakili’s sentimentality would completely ruin this spectacle. It doesn’t matter which way you look at it, nobody wants to watch a fat, shirtless guy crying.

Tey How [The Phantom Menace]

This alien was seen piloting the Trade Federation ship during negotiations with Naboo on the matter of trade routes and…Jesus, sorry, we fell asleep in the middle of writing that sentence. Featuring in several of the first prequel’s scenes that were just flat-out boring, rather than boring and stupid, Tey How is only remembered thanks to the “What’s wrong with your faaaace?” meme that followed Harry Plinkett’s devastatingly accurate (and pants-destroyingly funny) feature-length review of the movie. As such, we’ve built up a certain affection for this attractiveness-impaired beast, but that doesn’t mean we want to see a spin-off movie of her undergoing painstaking facial reconstructive surgery (because really, what other plot is there for her?) The good news is, such a spin-off is theoretically impossible as she was supposedly killed when Anakin blew up the Droid Control ship, but since we didn’t actually see her fiery, exploding death on the screen (because that would’ve meant something fun or interesting happening in The Phantom Menace), there’s always a risk of a miraculous reappearance.

After the last three movies they made about this guy, we have just one reaction to this suggestion:

Mark Hamill Talks Underwear From A Galaxy Far, Far Away