You don’t want to miss out on these killer discontinued bottles. 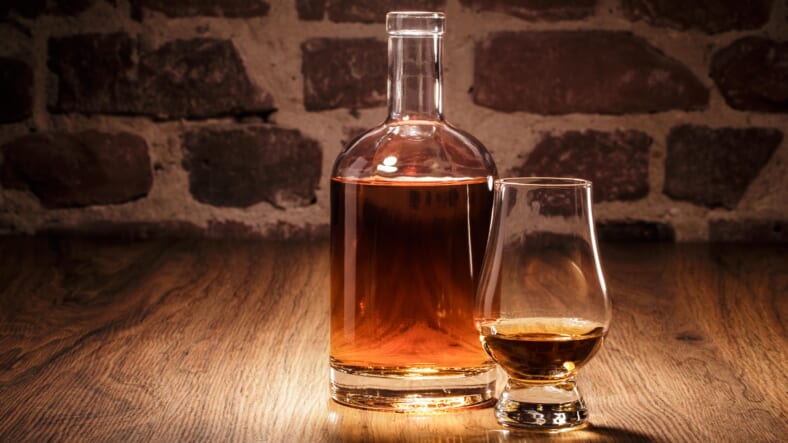 Whiskey lovers tend to prioritize limited edition and rare bottlings when spending their dough in liquor stores, but the real value is in discontinued bottles.

Rare whiskey and discontinued whiskey may both skyrocket in value once their supplies are limited, but they’re very different products. Limited editions, special bottlings, and anything with the year it was bottled printed right on the bottle are expected to be gone at some point. And though they may be one of a kind, they’re a crapshoot in terms of quality. Just because you liked the 2016 release doesn’t mean the 2017 will measure up.

Discontinued bottles, on the other hand, aren’t born into obscurity, nor are they unpredictable in quality. They become valuable when a recipe changes, when an age statement is removed from the bottle, or when the product is simply phased out of production either to supplement a more popular one, or because the distillery doesn’t see the point.

Since distilleries are notoriously cagey about actually telling people “we won’t be making any more of this product,” things can linger on shelves for years, simply because word doesn’t get out that the supply is finite. With that in mind we’ve put together a list of whiskey bottles you should grab if you run across them in stores, because what you see might be all that’s left, sooner or later.

Because scotch typically has a higher price point than bourbon, it has a distinctly different half life once discontinued. While a $20-a-bottle bourbon might fly out of liquor stores in cases, scotch bottles can be half a dozen times more expensive and thus will linger.

In this case, you can still find remainders of GlenDronach 15 Revival around the country, and we suggest you do that, because it’s a delicious cult-favorite single malt. You can even find some online, though the prices have begun to show the effects of demand-based panic.

Highland Park 15 was supposed to be a limited-edition release, but the company kept pushing it out because it was so damn popular. This year they’ve finally put a proper end to that.

According to Whisky Advocate they’ve not bottled a single drop since last May, which means some of us have been unknowingly drinking the last of it for a year. They’ve also decided to phase out Dark Origins (not a big deal) and 21-year (super big deal). Some of those may eventually make it back for a sequel but that could be years from now. Great.

Elijah Craig lost its age statement over a year ago, and the whiskey now just called “small batch” has gone through several bottle redesigns since then. Yes, supplies of this once-beloved middle shelf bourbon are all but depleted, but they’re still out there if you keep your eyes peeled (we found one a few months ago).

Keep a look out for bottles shaped like the one above. The bottle originally had a 12 printed on the front, but there were some later releases before they changed the recipe that did not, and those will say “12” on the back of the bottle in the text. But if the bottle looks different than the one above, you’re already too late.

While we’re talking about label changes, we should mention Weller bourbon’s new label. Weller is already one of the hardest bourbon brands to find (it’s a close cousin of Van Winkle, enough said) so we probably don’t have to tell you to scoop as many up as you can. But over the last year, we’ve actually seen anecdotal evidence that in the rush for the new labels (right), people have missed lingering old labels (left).

We picked up a bottle of Weller Antique with the old design in Manhattan last month for about $40. And a note for aspiring collectors: if they change the recipe for some reason, these old bottles will be a lot easier to authenticate.

Macallan’s non-age statement 1824 series ruffled some feathers in some countries by taking an easily-interpreted numbers system for the age of the product, and turning it into a series of color swatches. It was doubly insulting that the brand did this with its most prized releases: the sherry-aged range.

We’re not sure if they’ll eventually ditch the whole system (age statements are beloved but Macallan’s supply is really constrained for the next decade) but the oldest bottle Ruby has already been discontinued. If you find it, consider it a collector’s item, like those bottles of Pepsi Crystal.

No, Old Grand-Dad 114 has not been discontinued, but over the last few years it’s come close, having been rationed and nearly phased out. The Beam-produced bottling has been threatened so many times that we can’t promise 2017 won’t be its last year, so we’re including it on this list to be safe.

Even if it’s around in 2018, it’s a stellar, high-proof (and affordable) bourbon that frankly deserves a spot on your shelf even if it’ll be around for years to come (which, again, it might not).

Earlier this year, Bulleit opened its own distillery, and began producing its whiskey there. In as little as a few years (five-ish), the whiskey you buy will be coming from a different distillery than the whiskey you’re drinking right now, which was distilled by Four Roses.

Maybe it will taste the same (that rarely happens). Maybe it will taste better? But when the change happens, you’ll be suddenly struck by the panic of knowing one of your favorite bourbons might never going to be the same again. So if it’s your BBF (best bourbon forever) start stocking up now before there’s a run on the shelves.