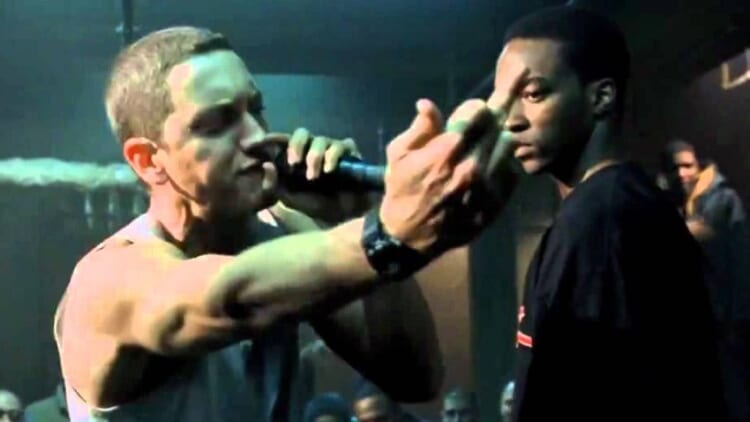 Eminem gave both rap fans and casual movie moviegoers a grisly look at his rough-and-tough upbringing on Detroit rap battlegrounds when 8 Mile was released 15 long years ago.

We see a fictionalized version of the legendary wordsmith’s humble beginnings as his character, Rabbit, pukes mom’s spaghetti in the bathroom of a desolate club before choking at his first battle. But by the end of the film, his undeniable skills earn him the respect of even his most vicious opponents.

With help from Shortlist, Screen Crush, and Vibe we’ve rounded up the following 8 Mile facts in honor of the classic movie’s anniversary.

1. “Lose Yourself” was the first ever rap song to win an Academy Award. The quintessential Eminem track won for Best Original Song in 2003 and earned him his eighth Grammy award for Best Rap Song in 2004.

2. 8 Mile grossed $51 million its opening weekend.At the time, it was the second highest opening for an R-rated movie in the U.S. It went on to gross over $240 million worldwide.

3. The house-burning scene was almost blocked. Detroit had an infamous arson problem for decades, especially on Halloween eve, dubbed “Devil’s Night”. Production had a hell of a time getting permits to torch an actual house, but they were ultimately granted under two conditions—they had to pay for the cleanup and contribute to a firefighter fund.

4. Quentin Tarantino was initially approached to direct. Executive producer Paul Rosenberg approached the Kill Bill mastermind as well as Trainspotting director Danny Boyle to helm 8 Mile. Ultimately, it was decided that Curt Hanson’s directorial vision most closely aligned with that of the production team.

5. Eminem hand-picked the battle beats. Em really did spit over O.C.’s “Time’s Up” and Mobb Deeps’s “Shook Ones” in the late ’90s at Detroit’s Hip-Hop Shop.

6.  Eminem lost 24 pounds to play Rabbit.During production, one of the set trailers was converted to a gym so he could achieve the lean physique audiences saw in the film. The rapper’s weight fluctuated between 150 and 230 pounds before he got sober 2008.

7. Xzibit makes a cameo at the “lunch truck” scene. The L.A.-born rapper plays a fellow factory worker who gets utterly destroyed by Rabbit during a lunch-break battle.

8. Don’t go looking for “The Shelter”— it doesn’t actually exist. The club where Rabbit cut his battle rap teeth, however, is based on the basement of St. Andrew’s Hall in Detroit and still stands today. For the film, the interior shots were created with a soundstage, while exterior shots were achieved by placing a facade over preexisting buildings.