Actor and Comedian John Early Is Taking Over All Your Screens

Look for him in Seth Rogen’s new ‘Neighbors 2.’ 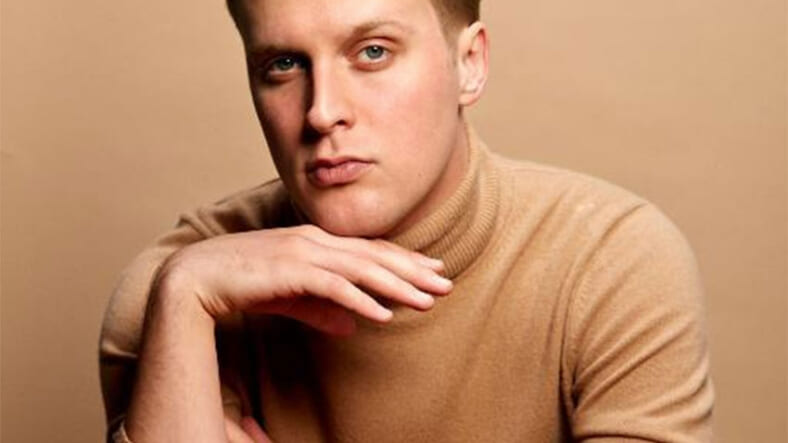 John Early is literally on fire — there are more flames coming off of him than a young Divine in Pink Flamingos. The young actor-comedian is everywhere—from scoring a Netflix Special titled The Characters to a major role in TBS’s Search Party as well as appearances in Judd Apatow’s show Love and Seth Rogen’s new Neighbors 2. John is also known for his role as hyper-competitive musical theater kid Logan in the hit show, Wet Hot American Summer. On top of all that John is flamboyantly and joyously himself in collaborations with BFF Kate Berlant while somehow still managing to host three comedy shows in New York, where he lives.

With Neighbors 2 hitting screens on May 20 and Search Party coming to TBS in fall 2016, we caught up with Early to talk about his comedy repertoire, his childhood growing up in Nashville, his collaborative relationship with Berlant, and what it’s been like working on longer-form, more structured TV shows and films.

Alicia Eler: I first became familiar with you through your videos with Kate Berlant. What’s the story behind your beautiful, creative, collaborative friendship?

John Early: We met doing standup because we were on a mutual friend’s show. I saw Kate’s set and I was so overwhelmed by just how funny she is. I’d never met anyone funnier in my life. I’d grown up idolizing female comedians like Amy Sedaris, Lisa Kudrow, Janeane Garofalo and Cheri Oteri, and so it was surreal to be considered a contemporary of Kate’s by virtue of being on the same show. I felt really, really overwhelmed because I felt like I was seeing one of my idols who I hadn’t seen yet — like the first time seeing a John Waters movie.

Then our same friend who put us on, Bruce Bundy, cast us in a short film called The Greggs where Kate played Shelley, a woman in a power suit who was running a test prep office. I played her androgynous, nervous assistant. That was the first time we ever hung out, and there was such a shared language and we were screaming laughing. That night we were like ‘I don’t want to part!’ And I came over the next night and we spent eight hours together, and we did a very adolescent, cathartic sharing of our childhoods with each other.

AE: I know you grow up in Nashville, and I’m wondering what your childhood was like? Were you the class clown, or the private gay kid? I was the private artsy gay kid, so I totally get that vibe.

JE: I definitely aspired to be more of an artsy gay kid, but I think I was maybe a little more polished than the fantasy high school version of myself. I was a good boy. I was president of the student theater group. I was like, ‘These are the plays I’m seeing in New York!’ I was introducing theater to my peers, and we were doing fundraisers and car washes.

I grew up with two Presbyterian minister parents, which meant they were asked to preach all over the South, and I spent a lot of time at Christian camp. My parents were in no way oppressive or conservative, but they definitely valued being nice, and not going wild, not going off your rocker as a kid. I was a good student. But there was always this burning desire to go to New York and be Sandra Bernhard.

I think my comedy is still this — and maybe it will change — this very delayed adolescence, way to be more of a contrarian. I did grow up around a lot of classically Southern religious stuff, but somehow I think as a gay kid you’re inherently more interior, protected by your introspection, or just by your secrets. I was able to protect myself going through that — I wasn’t really damaged by my exposure to Christianity. I had some really strong walls built up that were really helpful.

AE: I feel like I’ve gone through that sort of queer delayed adolescence thing myself. I have a piece in New York Magazine about the lesbian dick pic, and it feels so teen, as does all the tech stuff. But then I also think about how queerness has its own time cycle.

JE: Oh my god, what is the lesbian dick pic?! I can’t wait to read your piece and find out. And you’re right, it doesn’t need to be at the time of biological adolescence. It’s convenient if it is at that time — if you have a standard childhood, and then you’re living at someone else’s home off of someone else’s dime. It’s nice to rebel then, it’s much smarter. Because typically rebelling comes with some physically dangerous experiments and maybe emotionally dangerous too, but there’s no reason — I don’t see it as dysfunctional. I love it. I make money off of it.

AE: Yeah, same! So how does this all relate to the Netflix Characters special? I love the way that the John, the main character you play, started freaking out about the caterers because they’re black, and he wonders if this is part of a modern day slave or caste system, and then he’s just experiencing some intense white guilt. It’s a great way to talk about internalized racism and homophobia without coming out and self-shaming.

JE: Thank you! I’m so glad that it made you feel that way. We were writing this as the Supreme Court ruling for marriage equality happened, and I had already sent in two drafts and I thought, ‘they’re gonna kill me if I change it!’ But I thought it would be so much funnier if it were at a rehearsal dinner for a gay marriage. I was moved by certain stories about older gay people who had been together for a long time getting married. [But] it felt so strange celebrating that ruling because literally that week there was another shooting of an unarmed black man. It was such a bad time and it still is, and it was deeply uncomfortable celebrating this under the banner of human rights.

For the Netflix Characters special, I thought it would be so funny if I made it about this person who needs to remind everyone of how liberal he is. He’s in a biracial marriage, and he’s invited this group of artsy people to his place upstate. We have the aesthetic of the lighting reflecting back the Ethiopian food and the tapestry, and it’s very organic. I just thought it would be so funny if that was interrupted by the single most upsetting thing in American history: the reality of slavery.

AE: Speaking of which, I caught you on a day off. What are you shooting right now?

JE: I’m shooting Search Party, the TBS TV show. It’s produced by Michael Showalter, and stars Alia Shawkat from Arrested Development, John Reynolds, Meredith Hagner, and me. It’s like a Manhattan Murder Mystery with millennials. It’s very, very funny, but there’s also this real mystery element to it. I usually make stuff that’s more like behavior unleashed, so it’s nice to have, like, a plot. There’s something so fun to feeling like you’re in a Nancy Drew novel while still maintaining my comedic sensibility.

AE: Outside of the bigger film and TV projects, I know you do a lot of other comedy. Are you still doing the show “Literally Me”?

JE: Yes! I’m doing Literally Me at the Bellhouse in Brooklyn on June 2 and 3. It’s a combination of standup, showing some videos, sometimes I do characters. I have a band, Yazan and the Gates Family Band. I’m going to continue doing Showgasm for the rest of the year, and then we’ll have to say goodbye to it, just because it’s been about four years, and it’s best to end it on a high point like Sex in the City. I also do a weekly show every Tuesday called Cake Shop with Jacqueline Novak and Liza Treyger, and that’s the most informal of the bunch. It’s free and we just have great NY stand ups on it.

AE: What else can you tell me about Neighbors 2, which is out May 20.

JE: I can’t tell you about the role, since it’s kind of a built-in surprise, but it’s me so you know it’s gay as hell. That’s all I will say. I got to work with Zac Efron and Dave Franco, and it was totally surreal. The directors let me be funny — they weren’t like ‘oh my god, we’re putting a gay person in this movie! We have to tip-toe.’ They really just let me be free and go insane. Maybe they’ll cut me down to one line though — who knows. It would be funny if this interview came out and I wasn’t in the movie at all!