“Shooter McGavin, this is for you.” 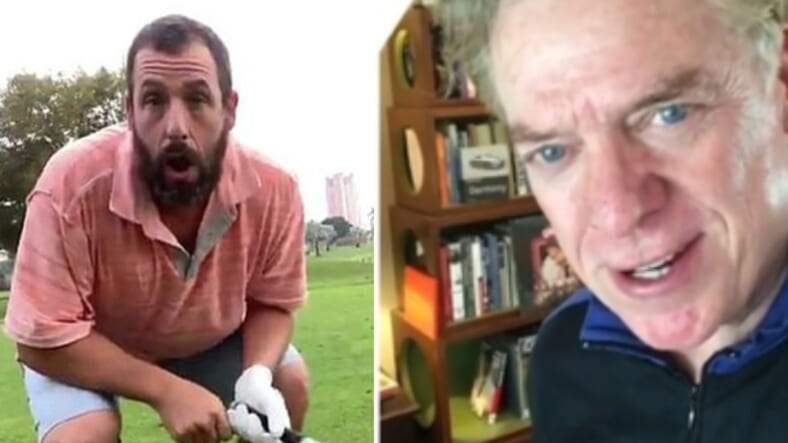 It was one of several hit Sandler movies that came out in the ’90s (Billy Madison, The Wedding Singer, The Waterboy and Big Daddy among them) and helped transform the former SNL cast member into a legit movie star.

Happy loves you all! Thanks for everything! pic.twitter.com/p1aY9JcFWh

Sandler celebrated that anniversary on Monday, sharing a video on his social media in which he recreated his unhinged running swing from Happy to perfection, saying it was his first time taking the shot since he made the movie.

He wasn’t posting the video as Adam Sandler, either, since after he took the swing, he called out “Shooter McGavin,” Happy’s cocky asshole golf pro nemesis from the movie, played by actor Christopher McDonald. “Shooter McGavin, this is for you,” said Sandler, “I’m not lying to you. That is smashed. Smashed. That went pretty well. You’re dead, Shooter!”

McDonald—as McGavin—couldn’t resist the chance to respond. He posted his own video in which he said, “Nice drive, Gilmore. Twenty-five years, huh?”

He set down his phone on the floor then and putted a golf ball into a tilted cup about 5 feet away. “Money,” he said into the camera, “Shooter‘s still got it.” He then dropped character and thanked fans of the movie and Sandler as well before challenging “Gilmore” to meet him “on the greens at 9.”

The exchange was probably a one-off, just for fun, but it certainly prompted some fans to speculate as to whether Sandler was planning on a Happy Gilmore 2.

So far, reports published in December 2020 only indicate plans to make sequels for Billy Madison and The Waterboy.

Given how much love golf and comedy fans still have for movies like Happy Gilmore and Caddyshack—there just aren’t that many golf comedies out there, unless you also find The Legend of Bagger Vance hilarious—something about Happy heading to face Shooter at a Master’s Tournament wouldn’t be a bad idea.