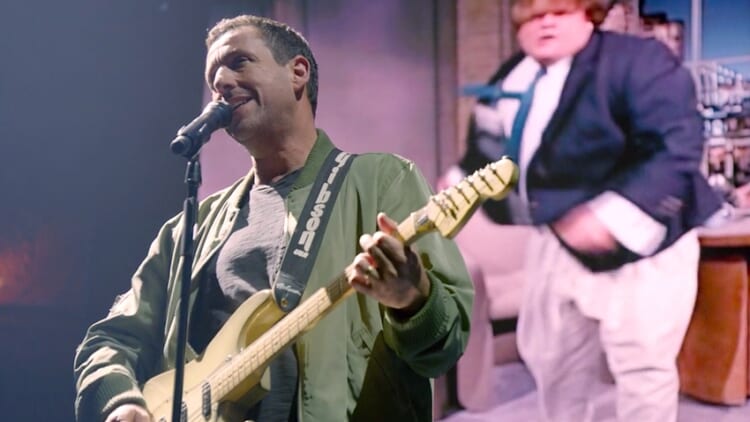 Whether it was his ridiculous “Opera Man” on “Weekend Update” or the song above—first performed on his Netflix special, 100% Fresh, then on his first-ever guest-hosting gig for Saturday Night Live last weekend—Adam Sandler has always mixed music with his comedy.

With this song, which is as moving as it is funny, Sandler honors late Saturday Night Live friend and fellow cast member Chris Farley, to remarkable effect.

Farley, a big funny guy in the tradition of John Belushi, was a tornado of comedic talent who died from a drug overdose on Dec. 18, 1997. Along with Sandler, Chris Rock, and David Spade, he was one of the biggest names to come out of early ’90s SNL.

Farley’s movie career had pretty much taken off—notably with his starring turn in Tommy Boy—when he died at 33.

In the song, Sandler sketches an unexpectedly moving portrait of Farley. “He was a one-man party,” Sandler sings, and that’s no surprise, but later in the song, he underscores the fact that great comedians are often very different people off-screen, singing,“I saw him in the office crying with his headphones on  Listening to a KC and the Sunshine Band Song  I said ‘Buddy, how the hell is that makin’ you so sad?’  Then he laughed and said, ‘Just thinkin’ about my dad…'”

Farley’s talent and perhaps some of the warmth that bonded him to fellow performers like Sandler is evident in his classic sketches from SNL, some of them now pop culture touchstones.

Chris Farley was the kind of comedy talent who wasn’t likely to be forgotten, but it’s still touching to see how friends like Sandler still remember him, with genuine warmth and emotion.

Of course Adam Sandler created his own share of unforgettable characters and live comedy moments on SNL. In his hosting appearance on May 3, 2019, a number of those characters came back for a visit in the sketch above. Sort of.