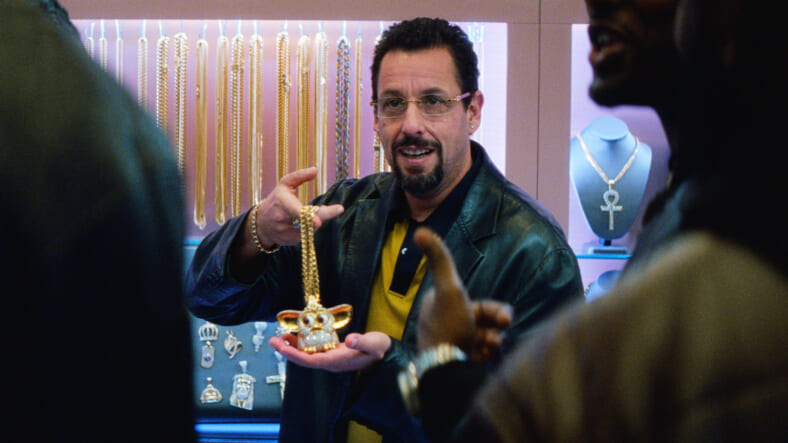 Adam Sandler is garnering the best critical reviews of his career for his portrayal of an always-hustling Diamond District jeweler in the great and gritty new indie movie Uncut Gems,  and Daniel Day-Lewis is among those taking notice.

Nearly 20 minutes into his appearance on The Bill Simmons Podcast with Uncut Gems co-star and former NBA player Kevin Garnett, Sandler recounted how he got a phone call from Lewis, the only actor to win three Best Actor Oscars, while buying basketball sneakers before a recent game of hoops.

“I’m getting my sneakers and then I look down at my phone and it’s Daniel Day-Lewis,” said Sandler, who added that Day-Lewis then lavishly complimented his performance in Uncut Gems: “He starts talking about grabbing the seat in front of him–‘I couldn’t let go of the seat in front of me’–and just saying how much he dug the movie, he dug [Kevin Garnett], he dug the guys. But it was the best call ever.”

It’s worth noting that Sandler, best known for starring in countless middle-brow comedies of varying quality but reliable profitability, previously received dramatic kudos for his role in 2002’s Punch Drunk Love. That film was directed by Paul Thomas Anderson, who also helmed There Will Be Blood, for which Day-Lewis snared one of his three Oscars. So they might have had a little something in common after all.

Uncut Gems is in theaters now. Check out the trailer above.