Are they ready for Hillary, feeling the Bern, or do they want Trump to make America great again? On the AVN Awards red carpet, the verdicts were split. 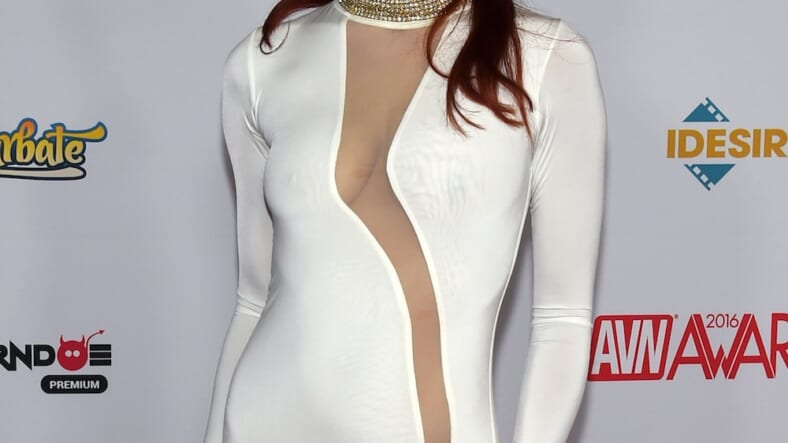 The lead-up to the presidential elections is exhausting, infuriating, and polarizing — and yet, that’s all we’re going to be talking about for the next several months. We haven’t even hit the primaries, but most everyone has a vocal opinion about who they think will be the best person to govern this country (or whose victory will make them flee to Canada).

Jayden ColeI don’t know yet. I think it’s little too early, so we’ll see. I’m definitely more concerned over who I’d vote for in Congress. Also someone asked me, “if Donald Trump hit on me, would I fuck him?” and I go “I’d probably fuck Hillary before I fuck Donald.” She’s kind of a bad bitch.

Anna Bell Peaks I’ll vote for the Republican nominee, so hopefully it’s Donald Trump. I like him, he’s a good businessman.

CeeJay StrokesProbably Hillary. I’m very political. I used to be very involved in politics back in the day. Quite a number of her views are good. Surprisingly enough though, Donald Trump, as crazy as it sounds, some of the stuff he endorses, I am for. But when it comes down to it, I’m going to vote for Hillary.

Veronica VainIt’s down to Trump and Hillary. I wish Trump would take some of the shit out, and I would be down. He’s too much, I worry about what would happen with certain things, of course. And then Hillary’s all “gay pride” and then like, “no, marriage is between a man and a woman”  She flip-flops, and that annoys me. The good news is that presidents don’t have that much power.

Ela DarlingBernie Sanders! I love his economic policy, I love his healthcare policy, I love the way that he treats women and immigrants and all marginalized people. He’s ethical, he has integrity, and I don’t think that’s really prominent in some of the other candidates.

Ryan DrillerWell, hopefully Hillary. I know she’s kind of slipping behind in the polls lately but we’ll see.

Tia KaiIt’s kind of a hard decision because of the media. Now that Donald Trump has Sarah Palin backing him up, I feel like there’s so much hype and so much going on that people aren’t looking at the real issues. I feel like people need to do more research before they start voting. So as of right now I honestly don’t know.

Ron Jeremy Hillary Clinton. Let me clear this up for you. If Robin Williams came to life and became a campaigner…George Carlin. Andy Dick. Sarah Silverman. If any of these comedians were campaigning to become President, we would love to hear what they had to say. We’d get a kick out of it, but do you want them to really win? No. You want their finger on the button? I don’t think so. Donald Trump is just water cooler dialogue. Hillary, I love her to pieces.