Alabama defeated Clemson for the title in a game marked by some memorable maneuvers. 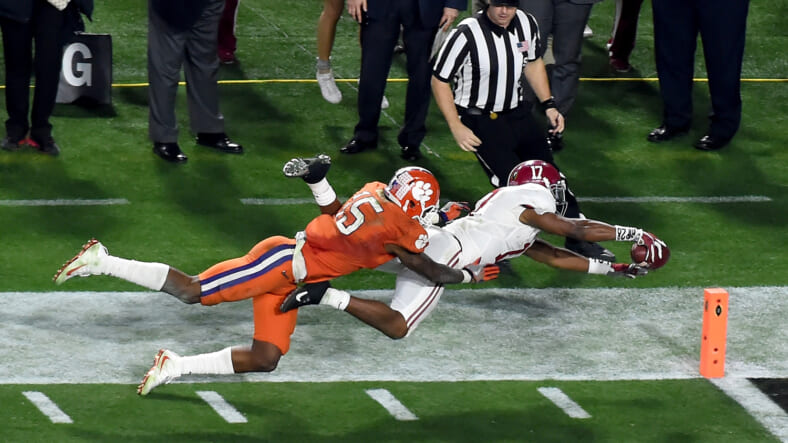 The result of Monday night’s College Football Playoff National Championship was little surprise to anyone who’s kept up with the game in the past decade: Alabama won, again. The 45-40 win over Clemson gave the Crimson Tide its fourth title in seven years. At this point, we’d be more surprised if Nick Saban didn’t hoist a trophy at the end of the season.

But unlike Alabama’s three most recent championships, the team didn’t cruise to victory on Monday night. The game was full of wild, momentum-swinging plays that are worth revisiting as we settle into the long college football off-season. So let’s do that right now, shall we?

1. Derrick Henry hits that hole: Alabama’s Heisman-winning running back started the scoring off with a rumble from mid-field that showed what makes Alabama’s offense so good. Not only is Henry a deceptively fast runner with a vicious stiff-arm, but he made the offensive lineman in front of him look like a bunch of goddamn bulldozers.

2. Deshaun Watson shows some Hawkeye-esque accuracy: It didn’t take Clemson long to answer right back with a perfectly placed pass from quarterback Deshaun Watson. Another thing to love about this play: the receiver is a former walk-on.

3. Nick Saban gets tricky: This was the turning point of the entire game. With the score knotted up at 24 and less than a quarter to play, Alabama surprised Clemson with a insanely well-executed onside kick.

4. Kenyan Drake returned from the five— and scored: Nothing stymies an attempted comeback quite like a 95-yard kick return for a touchdown. Drake’s blazing speed allowed him to pull away from Clemson’s squad on this run, and his desperate dive to the pylon ensured that this play will go down in Crimson Tide history.

5. Wayne Gallman turns into Tecmo Bowl Bo Jackson: With under six minutes left in the game and Clemson driving, running back Wayne Gallman put on a tackle-breaking clinic on this 39-yard run that, had the Tigers completed their comeback, would have been the play of the game.

I'd take Gallman on my NFL team any day. Can't teach this. pic.twitter.com/LkiHUMp07H

6. Henry scores for the third time with second effort: Alabama was up by only five at the start of this drive and needed a touchdown to put the game away. After a 63-yard pass to eventual MVP O.J. Howard brought Alabama to the Clemson 14, Derrick Henry went to work, running for gains of three, five, two and then one yards. Game over.