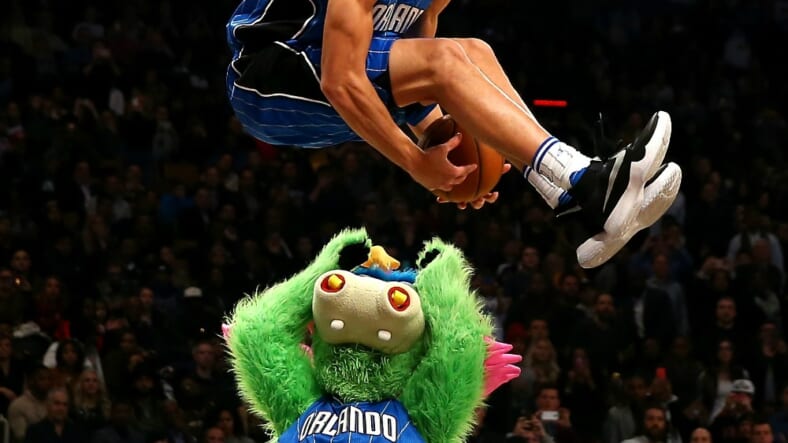 The NBA’s annual celebration of deep threes, big dunks and corporate sponsorship hit Toronto over the weekend, packing a month’s worth of highlights into three nights at the Air Canada Center. Whether it was the BBVA Compass Rising Stars Challenge, Taco Bell Skills Challenge, Foot Locker Three-Point Contest, Verizon Slam Dunk contest or the somehow unsponsored All-Star Game itself, there were plenty of moments worth remembering on Monday morning. Here are 10 of them.

10. A rare double alley-oop. Lowry to Wade to James to us going “DAMN.”

9. Did you, like Charles Barkley, think that Shaq was no long able to throw down? If so, The Big Short Sleeve proved you wrong.

8. This year’s skills competition saw a contingent of big men vying for a win in a small man’s challenge. That’s why eventual Rookie of the Year Karl-Anthony Towns was mobbed by his fellow Brobdingnagians after taking down 5′”9″ Isaiah Thomas in the finals. It was kind of a sweet moment.

7. Steph Curry ended the All-Star Game with a half court three that only he oculd make look this easy.

6. Speaking of Curry, one of the best things about any All-Star Game is seeing players have the freedom to act like fans. Like when Steph got Kobe Bryant to sign his jersey after the game.

.@StephenCurry30 gets @kobebryant to sign his jersey after the game. #NBAAllStarTO pic.twitter.com/FEIC8c1boV

5. Jon Stewart was invited to Toronto to read some intros before Sunday’s game, but his best moment came when he tried to dance with a bunch of mascots in what look to be his pajamas.

4. Saturday’s dunk contest ended with a flurry—more on that later—but Aaron Gordon’s dunk over Stuff the Magic Dragon was jaw-dropping and quite clearly the best dunk of the night.

3. OK, last Kobe moment, but this video of Chris Paul’s son stripping him is just too precious. In part, because at this point in their careers, Chris Paul’s son is probably the better player.

@kobebryant messes with the next generation, Zaire Wade & @littlechrisp! #ThisIsWhyWePlay

2. During a break in Sunday night’s game, human pogo stick and Vine star Jordan Kilganon threw down this crazy “Scorpion” dunk while wearing jeans. The player reactions say it all.

1. The final round of the dunk contest was a revelation. Gordon may have had the best dunk of the night, but defending champion Zach Levine ended up taking home the trophy after an unreal final round that injected some much needed life into a contest that’s been seriously lacking in the awe department.