Watch her seduce all of England here. 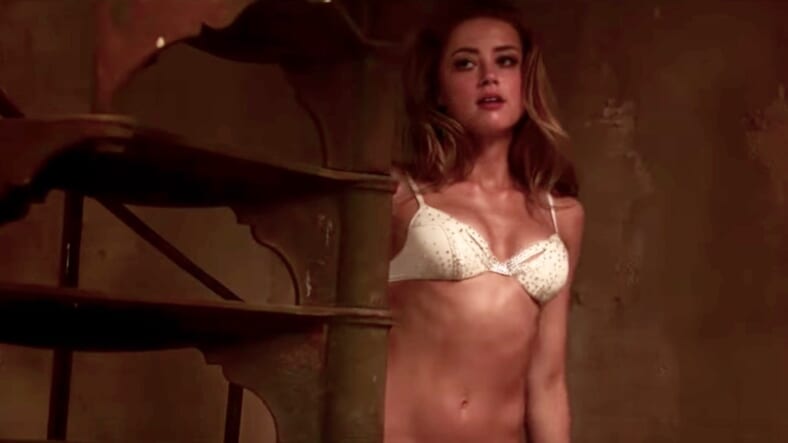 Amber Heard‘s troubled star vehicle, London Fields, is slated for a release in August, and we’ve finally been given a trailer.

It was worth the wait (this movie was shot in 2013, mind you). The trailer sees Heard as the clairvoyant Nicola Six, who begins “a tangled love affair with three uniquely different men: one of whom she knows will be her murderer,” according to the official plot.

Those men are played by Billy Bob Thornton, Jim Sturgess and Theo James.

Many suspected the movie may never come out. Vulture detailed some of the recent tumult behind the scenes.

Martin Amis wrote London Fields in 1989, and the book’s path to the big screen has been a complicated journey, to say the least. Directors like David Cronenberg and Michael Winterbottom took cracks at the script to no avail, and even when music-video helmer Mathew Cullen finally got London Fields into production with Amber Heard playing the clairvoyant temptress Nicola Six and a starry supporting cast including Billy Bob Thornton, Theo James, Cara Delevingne, and Heard’s then-husband Johnny Depp, the film was notoriously scuttled after its Toronto Film Festival press screening when Cullen moved to sue his producers for inserting unapproved footage into his edit. The next year, as Heard and Depp divorced amid claims of physical abuse, the producers sued their lead actress for $10 million, alleging that Heard had reneged on her obligations to make and complete the film they had approved. Heard countersued them in 2017, claiming that the producers had secretly employed a body double to make it seem like she had done more nudity than was stipulated in her contract.

The version set to hit theaters is reportedly shorter than what was shown in Toronto but appears to be no less sexy. And Cara Delevingne even has a cameo.

See Heard seduce practically all of London in an effort to solve her own murder in the new trailer above.