We won’t stand for this. 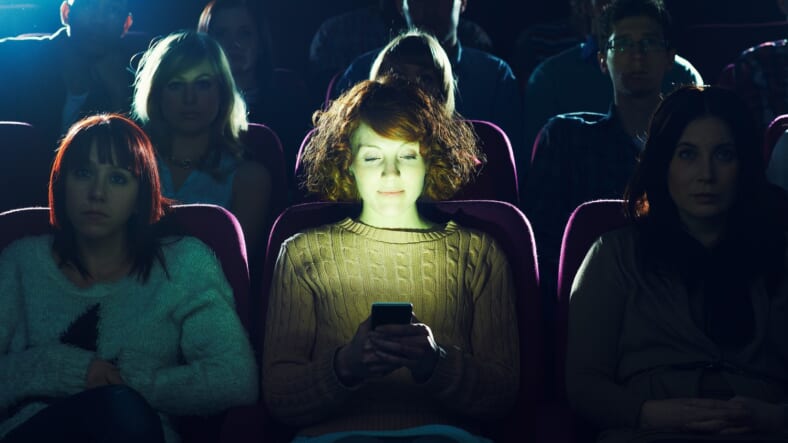 Picture this: You’re at your local movie theater catching a screening of Captain America: Civil War. Just as Team Cap and Team Iron Man come at each other in the highly-anticipated battle scene you’ve been waiting for, BAM: a bright light goes on in the seat in front of you. Some stupid asshole is texting in the middle of the movie.

This in itself is a horrifying prospect, but the reason why is even more infuriating: Aron wants to blow up the theatergoing experience as part of effort to court younger ‘millennial’ (ugh) consumers he’s convinced will *literally die* if they can’t tweet for two hours. Here’s what he told Variety:

When you tell a 22-year-old to turn off the phone, don’t ruin the movie, they hear please cut off your left arm above the elbow. You can’t tell a 22-year-old to turn off their cellphone. That’s not how they live their life.At the same time, though, we’re going to have to figure out a way to do it that doesn’t disturb today’s audiences. There’s a reason there are ads up there saying turn off your phone, because today’s moviegoer doesn’t want somebody sitting next to them texting or having their phone on.

This is a garbage idea. First of all, it’s not just those coveted millennials who are obsessed with their phones: nearly two-thirds (65%) of Americans are now smartphone owners as of 2015, up from 35% in 2011, according to the Pew Research Center. When we talk about lifting a ban on texting in theaters, we’re not talking about a few dumb 20-somethings who can’t wait until the movie ends to tell their friends that Civil War was ‘on fleek’ or ‘woke AF’ or who the fuck knows. This is basically an invitation for every jerk, regardless of age or generational identity, to fire up their cell in the middle of a movie. And once one person does it, everyone will do it. Process that visual.

More importantly, making any exception to the current texting bans, no matter how mild, is a recipe for ruin, even if it results in just one 20-something live-tweeting his way through Star Wars: The Force Awakens. The whole point of going to the movies — as opposed to, say, simply pirating your favorite films at home — is for the cinematic experience, that feeling of totally immersing yourself in a film while cocooned in the dark embrace of an air conditioned theater. In the darkness, the outside world melts away, and it’s just you and the story unfolding on the giant screen above. Being surrounded by the flickering lights of your fellow theatergoers’ smartphones completely destroys the illusion and negates the purpose of going to the theater in the first place. You might as well just leave the lights on.

Luckily, this new policy is far from certain or uniform. Aron told Variety that AMC would consider special sections for texting, or even a designated auditorium that would be text-friendly, like a smoking section (do those even exist anymore?). But even so, this is a slippery slope, one we can’t abide by.

Go ahead, Aron, and let the people text in pursuit of those delicious millennial dollars. But if you do, it’ll be your funeral — and we’ll be texting the entire way through.