It’s about a woman who suffers a head injury that makes her feel beautiful. 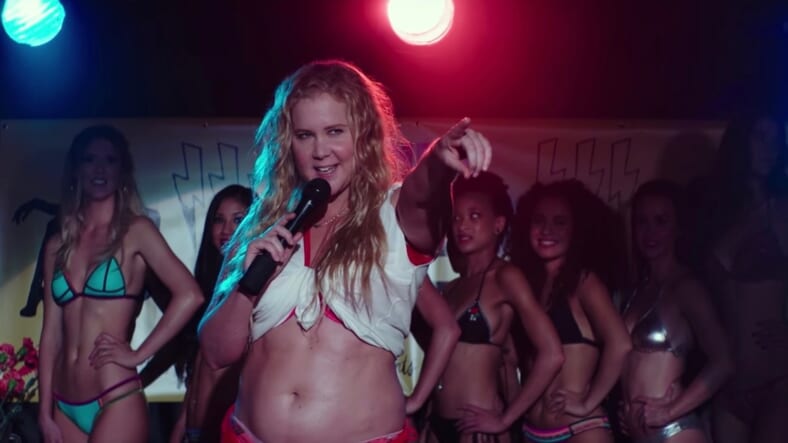 In the movie, the comedian plays Renee, a woman with piss-poor self-esteem who hits her head in a Soul Cycle class, which causes her to see herself as a perfect supermodel.

The beef people have with the movie is complicated: they think the character shouldn’t have to see herself as ultra-thin to feel beautiful, that she shouldn’t have to suffer brain damage to have confidence, that confidence shouldn’t be predicated on looks in the first place and that Schumer is, by conventional standards, still attractive.

The comedian has responded to the furor in a new interview with Vulture, claiming a lot of people made quick assumptions after viewing the trailer.

“There was a backlash to the trailer, and that was kind of disappointing,” Schumer said. “Even then, though, I understood it, and knew that the film wasn’t about what they thought it was about. I just wished they could see it.”

“I heard the comment, ‘Why does she have to think of herself as skinny?’ a lot. But you never see how I see myself!” Schumer explained.

“That’s a guess, that Renee thinks of herself as skinny. In the scene after the head injury, the assumption is that the woman I see when I look in the mirror is skinny, but I’m just seeing my same self and perceiving my body as beautiful.”

Though, it certainly doesn’t help her case that the trailer opens with Schumer being fat-shamed in a clothing store.

did amy schumer really think a movie about a woman needing a blow to the head to feel confident in her body would uplift people????

I feel pretty is literally the worst movie idea of all time. This woman seriously needs to fall and hit her head and believe she looks like a kardashian to feel pretty????? Are you serious??????

Schumer then addressed the second controversy: that she’s still white, blonde and able-bodied and therefore her character could not truly understand what it feels like to be spurned by society.

“There’s been a lot of projection,” she said. “I heard a lot of, ‘She doesn’t have a right to feel bad about herself because she looks however she looks.'”

“But first off, it’s not about an ugly troll becoming beautiful, it’s about a woman who has low self-esteem finding some,” she continued.

“Everyone’s got a right to feel that feeling, regardless of their appearance. We all struggle with self-esteem. I certainly have. Your friends who you think are so beautiful, they could be struggling too. You want them to see themselves the way you see them, but it’s not our place to say who should be allowed to have low self-esteem.”

The entire premise of the movie relies on Amy Schumer’s character (a white, middle class woman of average body weight) having reason to feel insecure and be looked down on. The fact that she would feel perfectly secure in a body like that is absurd, right? Please.

The day I feel like I can relate to a white, upper-class, cis, straight white woman about feeling unwanted by society just because she's MAYBE 170 pounds is the day the entire structure of our society is rearranged AND I've received reparations. https://t.co/EFhER6D7gA

A lot of people expect I Feel Pretty to be the second coming of Shallow Hall, the movie where Jack Black falls for a morbidly obese woman because he’s been hypnotized to see her as a slim bombshell Gwyneth Paltrow.

See if Schumer’s movie is really worthy of all the flack on April 20th, when I Feel Pretty hits theaters.