Another Day, Another Story of Andre the Giant Drinking Like a Goddamn Fish

The legendary wrestler is believed to have drank 156 beers in one night. 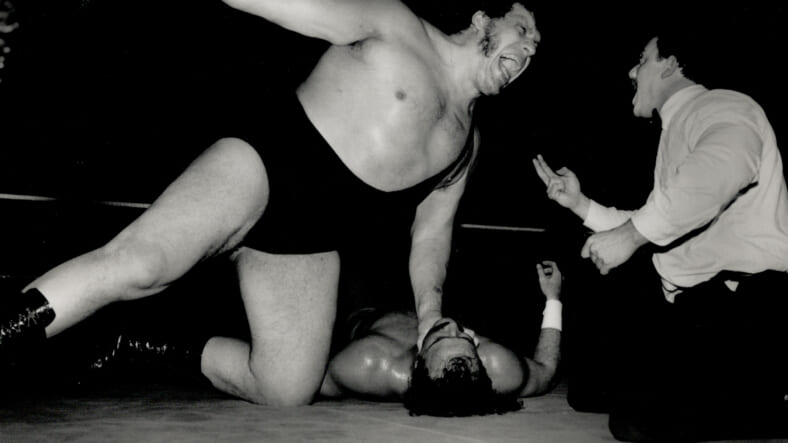 The world knew Andre the Giant as a 7’4″, 500-pound behemoth who was somehow agile enough to move around a wrestling ring. But his athletic feats are even more impressive considering the chronic pain he coped with because of his acromegaly, the disorder causing his massive size.

Now a new, awe-inspiring tale has emerged. According to an interview with wrestling old timer Jerry Brisco, Andre would often pound mass quantities of wine before his bouts. “Andre used to ask me to get him six bottles of Mateus wine and ice them down. He would drink those before we went to the ring, and no one could tell,” Brisco told the Tampa Bay Times.

This may sound shocking, unless you’ve heard all the other stories about Andre’s remarkable ability to pound alcohol. Legend has it, he could drink over 100 beers in a single sitting.

Cary Elwes, the actor who starred with the big man in The Princess Bride, recalls him drinking from a beer pitcher, not a mug, during meals. “It was forty ounces of alcohol, which he nicknamed “The American”—usually some combination of hard and soft liquor and whatever else he felt like mixing it with that day,” he wrote in his book As You Wish. Writer Richard English estimates that Andre racked up an astonishing $40,000 bar tab during the month he was shooting the 1987 fantasy classic.

Hulk Hogan has a story about Andre drinking 108 beers in 45 minutes, and Andre himself once told David Letterman he drank 117 beers in a single sitting. Others have claimed that he drank 156 beers in a night.

Now we can add another beer story to the Andre legend. Brisco also told the Tampa Bay Times this week that Andre once drank two cases of tall boys on a hour drive from Sarasota to Tampa. That’s 48 cans, each with 24 ounces, or the equivalent of 96 regular cans of beers.

Impressive as all this is, it’s also somewhat tragic. Ted Dibiase, the Million Dollar Man, explains why Andre drank as much as his did. “He hated pills, medicine, and painkillers and stuff, because he saw what it was doing to other guys. So the way Andre killed his pain and medicated himself was with booze.”

Andre died in Paris in 1993 of congestive heart failure.