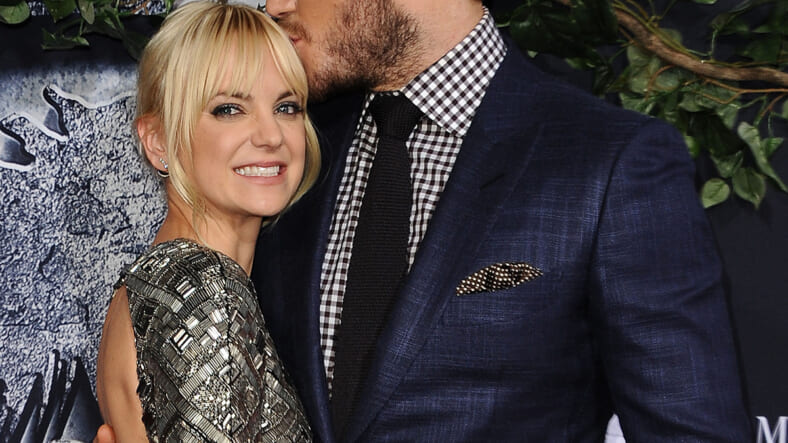 Fresh off his contribution to resurrecting dinosaur franchise Jurassic World, Chris Pratt’s will star alongside Hollywood golden girl Jennifer Lawrence in his next film, Passengers. Aside from being one of the most sought after actors in the biz, Pratt is ridiculously hilarious, and managed to wife up fellow hilarious actor, blonde beauty Anna Faris, back in 2009.

Faris has been keeping herself busy with her podcast Anna Faris is Unqualified (yes, there is one out there aside from Serial that you can listen to), and her latest episode brought Chris together with all of his on-screen lovers, both past and present. Aubrey Plaza, best known as her Parks and Rec persona April Ludgate (and wife of Pratt’s Andy Dwyer), and Jennifer Lawrence, currently playing the love interest to Pratt in Passengers, both joined in for what ended up being an extremely funny, and not at all awkward, conversation on the talented Mr. Pratt.

As Chris dialed in from the movie set with Jennifer, he was actually the one to bring up how honored he was to be romantically connected with all of these women, even if it’s only for a role.. “What other guy in the world could say that he’s on the phone with Anna, my real wife; Aubrey, my TV wife; and [speaking to Lawrence] well, we’re not married in this movie,” he joked.

While Anna didn’t bring up Jennifer’s recent interviews discussing her first big sex scene with Pratt, we did find out that JLaw is a big Indigo Girls fan and that Pratt spits raps for Anna all the time. It’s inevitable that these four beautiful creatures will end up in a movie together sometime soon, and we’ll be the first in line to see it.