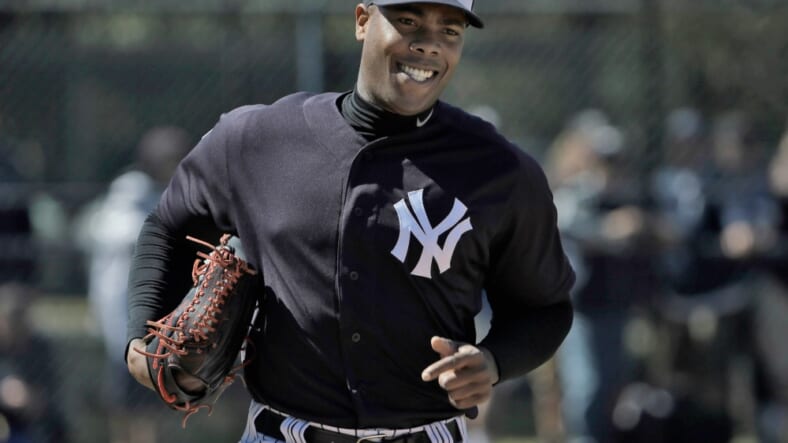 Late Tuesday, Major League Baseball suspended New York Yankees closer Aroldis Chapman for the first 30 games of the 2016 season for his role in a domestic violence incident last October. It was the league’s first suspension under a new domestic violence policy adopted last year and, all things considered, MLB and commissioner Rob Manfred got this one right.

That’s a big deal given all the difficulties this case presented. The biggest being that Chapman wasn’t charged or arrested after police were called to his Miami home. The police report from that night paints a scary picture, with the 22-year-old mother of Chapman’s child accusing him of choking her before he retreated to his garage and fired eight shots from a handgun. Later, as so often happens in domestic violence cases, Chapman’s girlfriend declined to press charges.

But MLB was prepared for that. It’s domestic violence policy allows the commissioner to suspend players without criminal charges being filed. And even though Chapman avoided legal trouble, Manfred took issue with some of Chapman’s actions that night. “I found Mr. Chapman’s acknowledged conduct on that day to be inappropriate… particularly his use of a firearm and the impact of that behavior on his partner,” the commissioner said in a statement.

By suspending Chapman only one week into spring training, Manfred and MLB acted quickly and decisively—a lesson clearly learned by watching the NFL repeatedly bungle its own domestic violence cases. Indeed, it’s easy to see how the NFL provided a blueprint for what not to do. Take Manfred’s reported negotiation with the MLB Player’s Association to avoid an appeal from Chapman. With the player accepting his punishment, MLB comes out looking stronger and avoids a protracted battle that could result in a reduced punishment and loss of creditability, which is what happened in the NFL’s infamous Ray Rice case.

All of that said, it’s not hard to find fault with the 30 game suspension. One could easily make the argument that the suspension should have been longer, especially in light of the 80 game ban MLB gives players who test positive for PEDs. But this case was complicated by Chapman’s service time in baseball. Put simply, if he were suspended for more than 45 games, Chapman would have had his free agency delayed another year. Handing down such a suspension would have invited an all-out war with the players association.

Even if the 30 games seems light for a guy who allegedly choked his girlfriend and admittedly shot a gun in his garage, intimidating her in the process, it sets a relatively high bar for MLB’s domestic violence suspensions. If no arrest and no charges results in a 30 game ban, more severe cases should result in more sever punishment.

We’ll find out when the league makes a decision on Colorado Rockies shortstop Jose Reyes, who was arrested last November for roughing up his wife in Maui. And in the event that a baseball player is ever caught on tape sucker punching his fiancé? We can expect a lot better response than what we got out of the NFL.