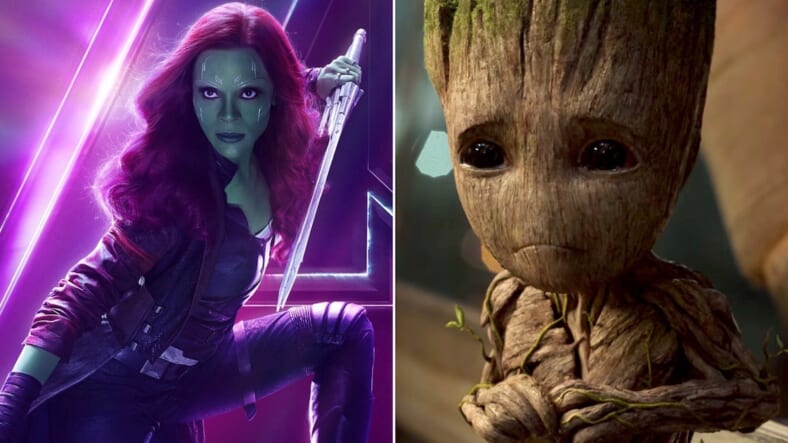 Infinity War brought together all of the Avengers for the biggest crossover event in Marvel history, only to kill off half of them and leave audiences sobbing in the fetal position.

Yep, Thanos won… this round.

Some aren’t so sure Gamora, Thanons’ adopted daughter, is actually dead after Thanos threw her off a cliff in return for the Soul Stone. (Remember: Thanos has to collect all six stones in order to build his all-powerful glove of destruction).

At the end of the movie after Thanos defeats the Avengers and wipes out half of the universe with the snap of his finger, he reunites with a child version of Gamora, seemingly inside the Soul Stone.

A lot of fans thought it was for real and that Gamora would live on inside the stone, but Infinity War directors Joe and Anthony Russo revealed the scene took place in Thanos’ conscience (apparently he has one).

Here’s what they told ComicBook.com:

“The power that it took Thanos to click his fingers, he’s so dramatic that if you look closely at the film and the damage of the gauntlet… it damages his arm dramatically. And that moment when he clicks his fingers sends him into this ethereal plane inside of the Soul Stone where as part of his quote unquote hero’s journey in the film, he has one last moment to convey a sense of guilt about what he’s done. It illustrates what a complicated character he is. So, to clarify, it’s a spiritual representation of her and obviously that’s something that the Soul Stone has power to do. But really it’s there to illustrate his pain and his guilt. I wouldn’t read much more into it beyond that.”

Guardians of the Galaxy director James Gunn has also revealed the tragic final words of wee hero Groot, just as the snap of Thanos’ fingers caused him to disintegrate along with Black Panther, Spider-Man, Doctor Strange and more.

“Dad” is the answer. Remember: the Groot you saw in Infinity War is actually the son of the Groot you met in the first Guardians of the Galaxy.

In any event, the revelation has shattered the souls of countless already grieving Avengers fans, prompting Gunn to semi-apologize.

I’m sorry! He asked! It’s in the script!

I knew my answer to the spoiler question last night was touching and sad, but I really did not expect to wake up to so many tweets of people telling me they’re crying. Sorry for that if you’re at work or whatever. But it means a lot to me you love the characters as much as I do. https://t.co/r0LM6TPzYd

Damn, how are they gonna destroy our souls again for Avengers 4?