This good deed could send him to “Paradise City” for sure. 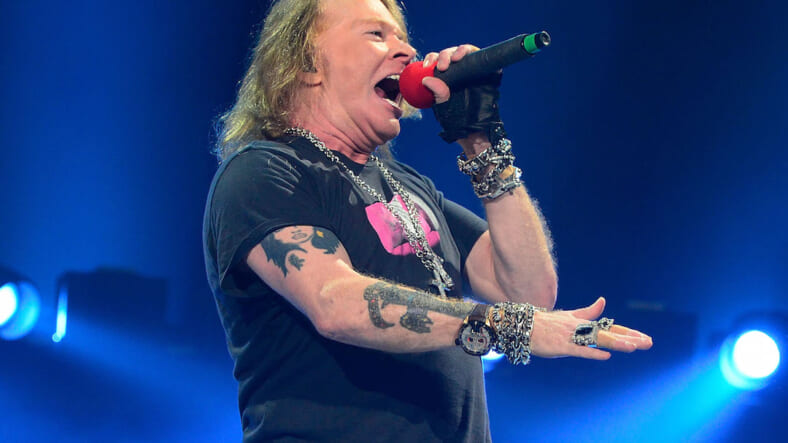 After 18-year-old Honduran-American waitress Sadie Elledge was left a vile note reading “We Only Tip Citizens” instead of a tip by a Virginia couple last month, news of the disgusting incident went completely viral.

Loudwire reports that Guns N’ Roses and sit-in AC/DC frontman Axl Rose reached out to Elledge and hooked her and her family up with free tickets to AC/DC’s Washington, D.C. show.

Actress Greice Santo had given Elledge a makeover as a part of her “Glam with Greice,” project, which reaches out to traumatized women in an effort to empower them to make positive changes, and reportedly put Rose in contact with Elledge.

In addition to the tickets, Rose invited the group all back stage for a meet-and-greet, and had his personal photographer snap some pics of the occasion.

In an email to Alternative Nation, Sadie’s grandfather John Elledge, who happens to be a die-hard AC/DC fan, wrote a touching letter recapping the thrilling experience:

“I have been an AC/DC fan for nearly 40 years, and Axl Rose’s invitation to my granddaughter and her family (which luckily included me) to last night’s concert in Washington DC was a true thrill. Not only was it a fantastic show, but being there with Sadie and her mom and dad was an unmatched experience for three generations of Elledges.Axl’s generosity and good humor made this an absolute highlight in our family’s lives. Talking to him backstage, hearing his humor and feeling his kindness to us only magnified my respect for the man. And his performance was out of this world. He really did get the job done. It’s incredible how, in picking Axl to front the band, AC/DC picked up where they left off, without missing a beat. He was both true to himself and true to AC/DC. I’m blown away.”

Axl Rose may be an older and slightly chunkier version of himself, but even after years of superstar status in the rock n’ roll spotlight, his heart is still in the right place.