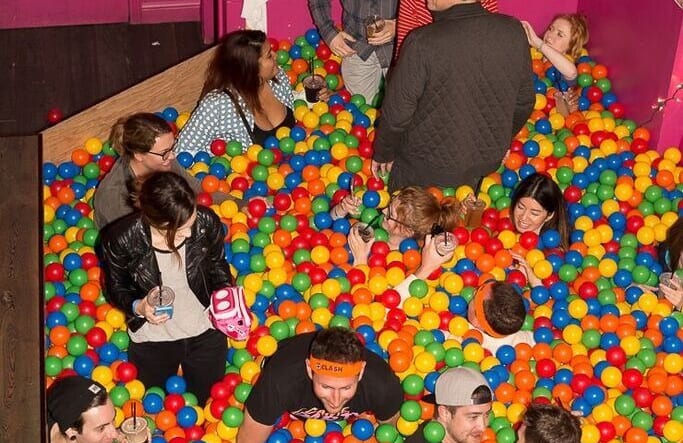 As we’ve grown up from wee children into big grown-ups, many of us have come to realize that a lot of the things we loved as kids can be just as if not more enjoyable now with a little help from every adult’s best friend: alcohol.

Well, the folks at Forward Motion took that sentiment to the next level when they decided to partner with the owner of the San Franciscan bar Romper Room and fill the space with 40,000 multi-colored balls, turning the cocktail lounge into a massive ball pit over St. Patrick’s day weekend. And from the looks of it, it was a hoot.

Unsurprisingly, bringing what’s a slightly absurd idea into reality wasn’t exactly the type of thing one can do with a quick snap of their fingers, according to Mashable.

“It took a little over a year to actually make it happen, as the biggest obstacle was trying to raise enough money to purchase 40,000 ball pit balls,” Lum told Mashable in an email. “After several failed crowdfunding attempts, I decided to just start selling tickets to [the] event that didn’t even exist. It took a long time trying to raise the money, but it was all worth it in the end.”

Lum also reported that there were kangaroo costumes, conga lines, and ball fights. I don’t care who you are, you can’t pretend like the whole thing doesn’t sound like it was totally awesome.

And the best news of all is that there’s talk of Lum expanding the project into other cities. So if you see any tickets or crowdfunding campaigns that contain the words “ball pit bar,” jump on the opportunity so you can jump into a booze-soaked relic of you childhood.