The former Disney starlet opens up to Maxim about being bisexual, her biggest girl crushes and daring social media presence. 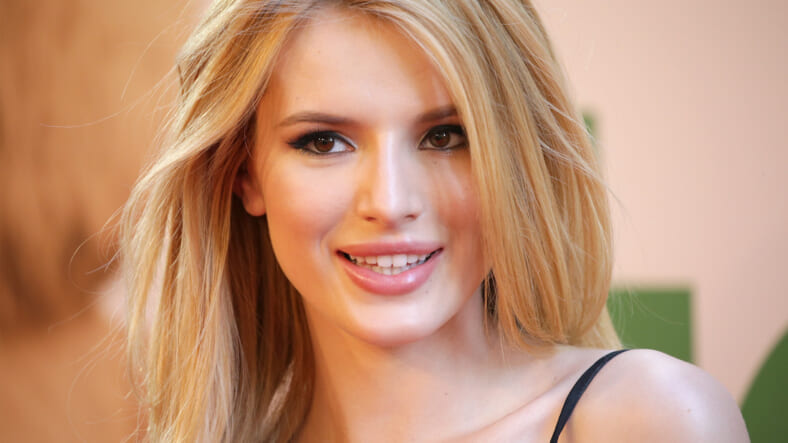 For an actress who’s on the cusp of greatness, about to break out from her Young Hollywood bubble to tackle meatier and potentially Oscar-caliber films, Bella Thorne is refreshingly chill about it all.

“Jessica Chastain gave me great advice, which was, ‘Don’t let anyone change you. You’ve got to be you,” Thorne said of working with the actress for the forthcoming drama The Death and Life of John F. Donovan. “Getting advice from an amazing person like that who has had a beautiful career and has stayed cool, that really stuck with me.”

It must have. The 19-year-old recently came out as bisexual on Twitter, after fans questioned her about Snapchatting a photo of her making out with a female friend. In fact, Thorne has become arguably just as well known for her gloriously unfiltered social media accounts, where she’s rarely not posting bikini selfies, debuting new piercings and tattoos, or sharing steamy shots with new beaus.

Maxim recently caught up with the rising actress (and occasional musician) to learn about her role in the upcoming dark comedy Shovel Buddies, in which she plays the sister of a recently-deceased teenage cancer patient. But this being Bella Thorne, our conversation was remarkably candid, with her talking everything from social-media backlash to her big, fat girl crush on Demi Lovato.

Why did you decide to publicly come out as bisexual?I didn’t even think about it. A fan on Twitter asked me, and I’m super open about it. So I just said, “Yeah!”

wake me up when these damn girls will officially date @bellathorne i'm just a happy shipper pic.twitter.com/W0Xp64aXmm

Aww thank you for all the accepting tweets from everyone. I love you guys ❤️❤️❤️ #pride

Has there been any backlash?It is hard in this business for us. It really is. I have already had people talk shit to me. And it comes from people in the industry, not even fans. I’ve had studios tell me my image is too “out there,” hinting at it but not really saying it.

What actresses do you look up to?I love Rose Byrne. She does two of my favorites genres so well–comedy and horror–so I can’t do anything but admire her completely. And obviously, Jennifer Lawrence. I like her attitude and how she is always speaking out. A lot of people tell me I’m like her, which is cool.

Have you got any celebrity crushes, male or female?Demi Lovato. I must say…rawrrrr. She is a pretty toasty woman. Miley Cyrus, too. She’s dope. But Demi is fire, just fire.

What do you look for in a guy, or girl for that matter?Somebody who gets you, that relationship where somebody’s just completely accepted who I am as a person and is just like, “Fuck it!” I love that.

Tell me about your role in the upcoming movie Shovel Buddies.She’s so shut off and is not really open to dealing with anything. That’s how she deals with her brother’s death instead of being closer to her friends and family. But I understood where she was coming from. When my dad dies, I didn’t cry for like two weeks, and that made me feel even more guilty. That made me want to portray the character, and it made me feel a little more comfortable about my dad’s death. People deal with death in really different ways.

You’re certainly venturing into more serious roles. Any other projects you’ve got coming out?I’ve got Madea coming out, and I’ve got Keep Watching coming out later this year. I’m also working on new music right now, something punk-ish which is interesting. I got some other shit I’m doing, but I can’t remember.