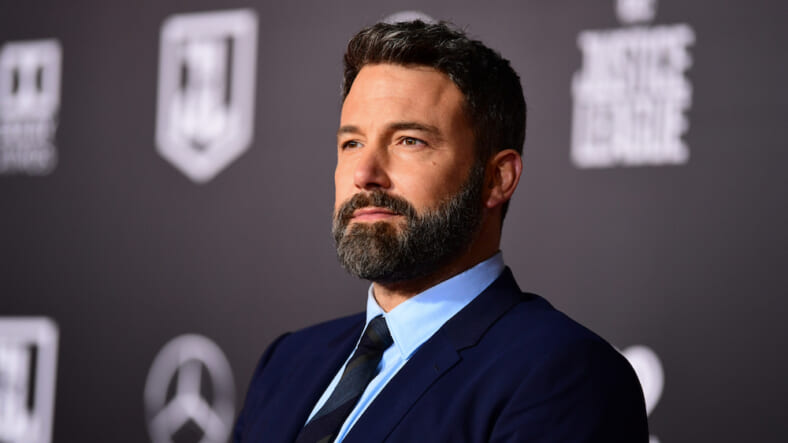 Poking fun at sad, divorced, middle-aged Ben Affleck and his ugly back tattoo has become a pastime of celebrity bloggers everywhere (guilty!).

But Affleck isn’t going down without a fight. And we’re glad because fighting is great cardio.

A humor piece ran in the New Yorker of all places, titled “The Great Sadness of Ben Affleck,” remarking on the pitiable figure we see before us and what it says about our culture that we pity him.

Ben Affleck’s is the kind of middle-aged-white-male sadness that the Internet loves to mock—a mocking that depends on a rejection of this sadness, as well as a hedging identification with it. https://t.co/AHZrRgNrGs

But mostly, it made fun of his back tattoo, which Affleck once falsely claimed was “fake” and “for a movie.”

“The tattoo—so gargantuan that the bird’s tail found itself dipping below the waistband of Affleck’s blue swim trunks—was plainly visible. In one image, the actor stands alone, looking off into the middle distance. His gut is pooching outward in a way that, in a more enlightened country like, say, France, would perhaps be considered virile, not unlike the lusty Gérard Depardieu in his prime but, in fitness-fascist America, tends to read as Homer Simpsonesque.”

He didn’t even let Matt Damon settle this one for him. Affleck took to Twitter to fire back, claiming he is doing “just fine.”

The Internet rallied around the unlikely body-positivity champion, celebrating him as the best Batman ever.

Hey New Yorker, trying to sound literary and intellectual doesn't shield the fact that this is a whole story that essentially says Ben Affleck is fat now. https://t.co/6S3KZtLJYU

You know what, why doesn’t everyone leave Ben Affleck alone? That New Yorker piece was spiteful. It’s not often you see people putting the boot into a man for getting older, it’s usually done to women, but it’s just as mean and unnecessary. Leave him be.