The Best ‘X-Files’ Episodes To Watch Before The Reboot

If you want to watch all 200-plus, knock yourself out. Or just watch these. 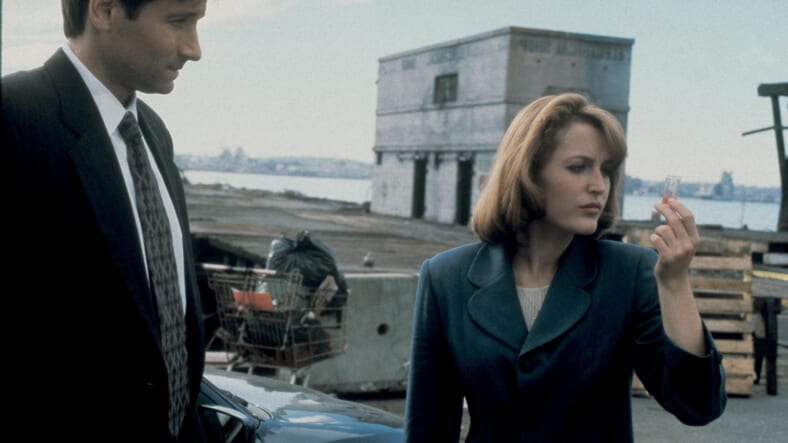 The X-Files reboot miniseries we’ve all been breathlessly awaiting is finally coming on Sunday, and while we already know the season premiere isn’t great, the series itself will ultimately win you over. It’s been awhile since Agents Fox Mulder and Dana Scully and her shoulderpads shared a screen together; long enough that you might have forgotten what you loved about the show in the first place. We’ve hand-selected 10 of our favorite X-Files episodes to get you back in the mood — these are a mix of mythology and “monster of the week” episodes that best showcased the beautifully bizarre minds of Chris Carter and Vince Gilligan. Notice that there is disproportionate representation of Season 2, because Season 2 was the best.

The X-Files hits the ground running as the practical-minded Agent Dana Scully, M.D. is called in to be a cooler for the conspiracy-obsessed Special Agent Fox Mulder, who is convinced the U.S government is covering up evidence of extraterrestrial visitations. The tone is quickly set for Mulder to be the charming, wily, open-minded truth seeker of the pair, with Scully as his overly rational fuddy-duddy straight woman. Of course the dynamic would evolve throughout the series – but in the beginning, it’s definitely Mulder showing Scully the light.

One of the better standalone “Monster of The Week” episodes, and certainly among the creepiest, the monster here is a pair of innocent looking little girls who are murderous clones. Unsettling doesn’t begin to describe the sideways glances the identical girls give each other to silently communicate their next kill. Stay away from sugary sodas!

Duane Barry is an escaped psychiatric patient who claims he’s been abducted by aliens. When the FBI tries to diffuse a hostage situation he creates, Mulder breaks protocol by taking Duane Barry’s account of his abductions at face value — because he actually does believe him. Notable for being the first episode directed by Chris Carter, and for Duane Barry’s insistence on speaking in the third person. “You think you know what Duane Barry’s going through? You don’t know Jack!”

Clones and abortion clinics and shapeshifters and imposters oh my! There’s a lot going on in “Colony” the first part of one of several X-Files episode blocks. An essential mythology episode, “Colony” introduces an adult woman claiming to be Mulder’s kidnapped sister Samantha. Can we trust her?

“End Game” picks up right where Colony left off: Mulder continues to search for the truth about Samantha’s disappearance, which leads him to the Bounty Hunter’s submarine, where he is exposed to the shapeshifter’s toxic blood. When he is eventually rescued and treated for hypothermia, only Scully — and science — can save his life.

The late, great Peter Boyle won an Emmy for his guest-starring appearance in probably the X-Files’ best standalone episode. Boyle is Clyde Bruckman, a life-insurance salesman with a psychic ability to see how people will die; a gift he wishes he could return. But he agrees to help Mulder and Scully to investigate serial killings of fortune tellers. The relationship is a pivotal one for Scully, and later in the series we understand Bruckman’s cryptic answer to how she will die.

Latin for “remember that you can die,” “Memento Mori” gives Gillian Anderson a rare opportunity to show off her chops and claim an episode as her own. Here, she faces a diagnosis of brain cancer that may have been a result of her earlier abduction. But while Mulder is obsessively searching for clues that Scully’s illness might be connected to a larger conspiracy, she stoically enters treatment. Anderson won an Emmy for this episode.

The time-travel standalone episode is a stylistic homage to classic cinema and pivotal in the Mulder-Scully romance arc. When Mulder travels to investigate a ship that disappeared in 1939, he finds himself in a time warp-parallel universe where the past and present worlds collide — and where he realizes the depth of his feelings for Scully.

“The Gift” is the first time we see Mulder after being abducted in the season 7 finale, where the show had previously been scheduled to end (and where some believe is should have). It’s a nice showcase for Agent John Doggett, who proves to be a true, loyal ally to Mulder and Scully even when not professionally required to be.

A standalone episode that nonetheless has some tonal connection to the characters’ histories, “Sunshine Days” is also one of the X-Files’ most batshit crazy: Much of the action takes place in a perfect recreation of the Brady Bunch house, proving once again that Brady Bunch references are a guaranteed win in any form of pop culture. Vince Gilligan directed the series’ penultimate episode, which is better than the season finale, which you can read about to remember how it all shook out.