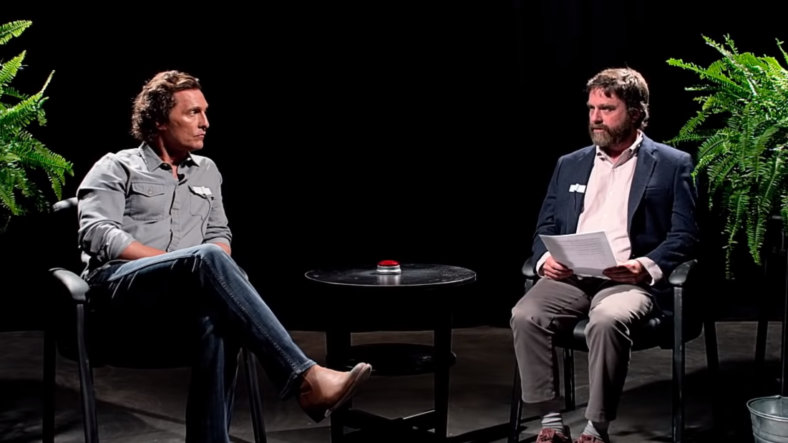 Zach Galifianakis is back to self-sabotage more interviews with famous celebrities in the hilarious new trailer for Between Two Ferns: The Movie.

Fans of Funny or Die’s sardonic talk show on which the forthcoming Netflix release is based will immediately recognize the low-budget format depicted in the movie: Galifianakis sits across from Matthew McConaughey to ask his typically rude questions before a faulty sprinkler system “temporarily kills” the A-list actor.

From there, things get a little meta as the premise unfolds. Deadline does a fine job of summing it up:

Galifianakis dreamed of becoming a star. But when Will Ferrell discovered his public access TV show Between Two Ferns and uploaded it to Funny Or Die, Zach became a viral laughing stock. Now Zach and his crew are taking a road trip to complete a series of high-profile celebrity interviews and restore his reputation.

“Ten [episodes] of your dumb internet talk show, and you give me a network talk show,” Galifianakis tells Ferrell. “I’m a white man, and I’m straight, and I deserve it.”

Some, like Hamm , Larson and Letterman, appear as Galifianakis’ guests, while others, like Teigen, are encountered along the hijink-filled road show.

Between Two Ferns: The Movie hits Netflix on September 20.