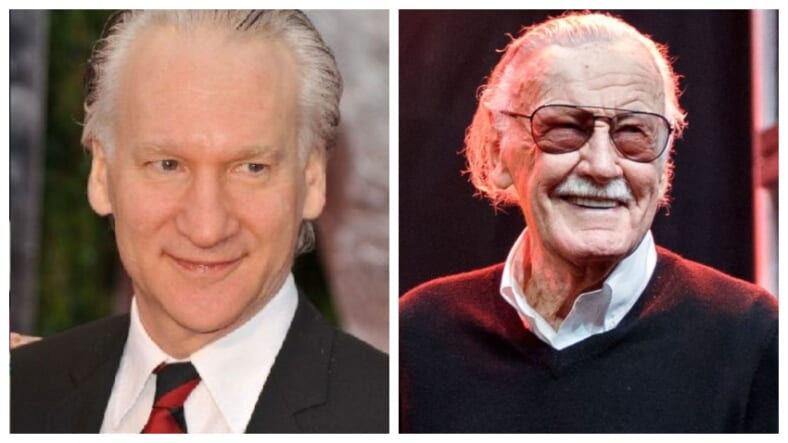 Being a jerk is a deeply-embedded part of Bill Maher’s brand. The problem with that is he sometimes bumbles into hornets’ nests of controversy and comes off looking like twice the jerk he was before, not some blunt truth-teller.

With a recent blog post on the website for his HBO show, Real Time With Bill Maher, he took on the memory of Marvel comics icon Stan Lee and fans of comics in general. That was a bad idea.

The guy who created Spider-Man and the Hulk has died, and America is in mourning. Deep, deep mourning for a man who inspired millions to, I don’t know, watch a movie, I guess. Someone on Reddit posted, “I’m so incredibly grateful I lived in a world that included Stan Lee.” Personally, I’m grateful I lived in a world that included oxygen and trees, but to each his own. Now, I have nothing against comic books – I read them now and then when I was a kid and I was all out of Hardy Boys. But the assumption everyone had back then, both the adults and the kids, was that comics were for kids, and when you grew up you moved on to big-boy books without the pictures.But then twenty years or so ago, something happened – adults decided they didn’t have to give up kid stuff. And so they pretended comic books were actually sophisticated literature. And because America has over 4,500 colleges – which means we need more professors than we have smart people – some dumb people got to be professors by writing theses with titles like Otherness and Heterodoxy in the Silver Surfer. And now when adults are forced to do grown-up things like buy auto insurance, they call it “adulting,” and act like it’s some giant struggle.

Maher went then wrote, “I’m not saying we’ve necessarily gotten stupider,” but that we “are using our smarts on stupid stuff.”

It doesn’t need to be pointed out why this made so many people mad. Of course there was the timing—Lee only died days ago—but the sneering tone was pretty ill-advised given that Marvel produces massively popular movies based on, you know, comic books.

Maher’s just trolling, and lots of people are rising to the troll. (Julie Burchill did it better 30 years ago with her “There aren’t any adult comics because adults don’t read comics” line. ) More people cared about Stan Lee’s death than care about Bill Maher alive. https://t.co/yRzFCYQBzl

Gaiman’s reaction summed up the spirit of many others.

2. All Maher deserves is to be dunked on, then quickly forgotten. The guy fucking sucks. https://t.co/wb62YjtjR6

It's crazy to me that Bill Maher is using Stan Lee's death to insult the maturity of comic book fans. It's crazily out of character for him to try to assert his intellectual superiority over the ignorant masses in a shrill, strident, obnoxious and attention-seeking way.

Bill Maher about Stan Lee: “a man who inspired millions to, I don’t know, watch a movie, I guess.”

Also Bill Maher: *in one of said movies* pic.twitter.com/j66GIZJEsP

Pro tip: don't assume people criticizing Bill Maher about his Stan Lee column have just finally drawn the line now. You can complain about his shitty column and also have complained about his bigotry, racism and misogyny in the past. Context is important.

— the jon rosenberg is coming from INSIDE THE HOUSE☎ (@jonrosenberg) November 18, 2018

The last tweet above was in reference to a subset of reactions to the controversy—those who wondered why no one thought to complain about Maher over a ton of other issues.

I do not judge you because you like Stan Lee and comic books. I do too.

But if it took Stan Lee and comic books for you to see that Bill Maher is a pretentious, unserious asshole, trying and failing to sell mediocre douchery as bravery, I do judge you.

One tweeter probably put his finger on the true spirit behind Maher’s post.

This is probably where Stan Lee might have put the issue to rest with one of his classic phrases: “‘Nuff said.”