Yes, Keanu is on board. 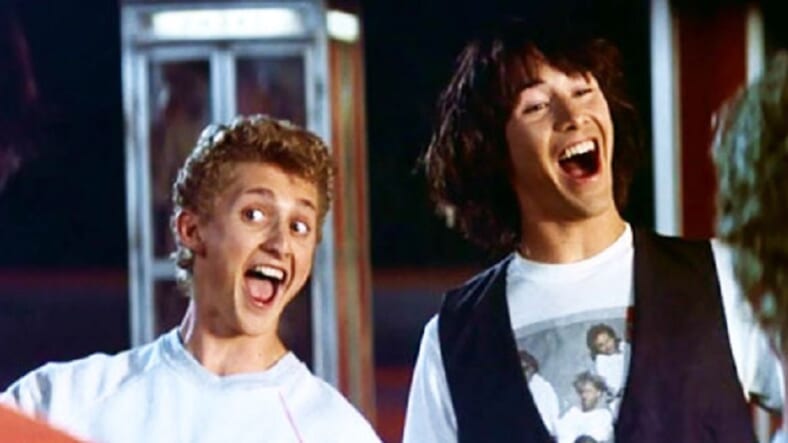 For a long time there’s been a gaping hole in pop culture that could only be filled by a couple of Wyld Stallyns named Bill S. Preston, Esquire, and Ted “Theodore” Logan. It sounds like screenwriter Ed Solomon and Alex Winter (Bill) and Keanu Reeves (Ted) are ready to do something about it.

In an exclusive interview with Digital Spy, Solomon revealed the title of the third movie: Bill & Ted Face the Music. He also gave readers the low-down on the storyline, which sounds like a perfect fit for old school fans.

Solomon, who created the characters with Chris Matheson, tells Digital Spy that he and others “have been working for almost 10 years to get this thing made; Alex Winter, Keanu Reeves, Chris Matheson, me.”

They have a director involved, Solomon says, and Steven Soderbergh is set to produce. More importantly, Solomon reportedly has “a script that we really are proud of, that we worked very hard on, that we’ve done many iterations of.”

Here’s the story setup, according to Solomon:

Face the Music will see Winter and Reeves play middle-aged versions of Bill and Ted, who are now family men rather than young aspiring musicians. However, the death of actor / comedian George Carlin in 2008 posed a problem when it came to the character of Bill and Ted’s mentor Rufus.
Solomon confirmed, however, that the new film will not only address the loss of Carlin, but serve as a tribute to the beloved comic and his character.

The plot reportedly sends older Bill and Ted on a trip through time to meet their younger selves in 1989.

Solomon describes a “favorite scene” to Digital Spy in which “middle-aged, 50-year-old Bill and Ted return to the Circle K and see their teen selves and Rufus, and actually interact with their teenage selves, played by their actual teenage selves.”

Despite the involvement of big names like Reeve and Soderbergh, Solomon says Hollywood has been resistant to the new movie—in part because studios seem bent on rebooting the franchise with two new young actors.

Come on Hollywood, greenlight Bill and Ted Face the Music!
The script for the third movie is ready to go and will have the older Bill and Ted travelling back to meet their Excellent Adventure selves. pic.twitter.com/YKkILySdKK

Love everything @ed_solomon says about Bill & Ted and how the third film will work here and really, really hope the movie happens soon https://t.co/jVvP9YGQAA

Apparently Bill & Ted 3 is now being called Bill and Ted Face The Music. BUT it hasn't gotten the green light yet.

And that's because the the studio doesnt want the original actors. They want to reboot it with new younger actors.

I REALLY hope they don't do that.

As far as we’re concerned, it’s either Winter and Reeve reprising their roles or go home.

Some things are too totally excellent to mess with.