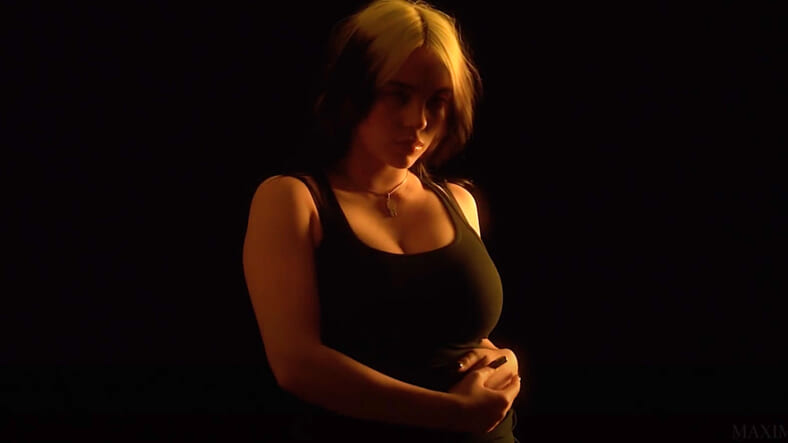 Screengrab: "Not My Responsibility"

Billie Eilish has some thoughts on media reaction to her body-positive tour video that recently went viral, as well as racially-charged double standards in the pop music industry.

The 18-year-old singer said she wasn’t impressed by coverage of her short film, “Not My Responsibility,” that she played just before the last song of her live set back in March, which took on body shaming and toxic media culture.

In an interview with British GQ, Eilish said: “I felt very motivated to do it. Although, of course, the Daily Mail headlines the next day ran ‘Billie strips to her bra in new tour visuals’. I thought, ‘Are you actually deadass?’ How predictable.

“It is me saying: look, there is a body underneath these clothes and you don’t get to see it. Isn’t that a shame? But my body is mine and yours is yours. Our own bodies are kind of the only real things which are truly ours. I get to see it and get to show it when I want to.”

Eilish also revealed that she has “never felt desired,” saying, “My past boyfriends never made me feel desired. None of them. It’s a big thing in my life that I feel I have never been physically desired by somebody. So I dress the way I dress as I don’t like to think of you guys–I mean anyone, everyone–judging it, or the size of it.”

In the same interview, Eilish criticizes the racially-tinged double standards in the music industry after being asked for her thoughts on Tyler The Creator’s Best Rap Album Grammy award speech for Igor.

“I have always hated categories,” she said. “I hate when people say, ‘Oh, you look like ‘blank.’ You sound like ‘blank.” It was such a cool thing Tyler said. I agree with him about that term.” Eilish also wondered why Lizzo was listed in the Grammys R&B category when, “she’s more pop than I am.”

“Look, if I wasn’t white I would probably be in ‘rap’. Why? They just judge from what you look like and what they know. I think that is weird,” Eilish said. “The world wants to put you into a box; I’ve had it my whole career. Just because I am a white teenage female I am pop. Where am I pop? What part of my music sounds like pop?”

Judge for yourself by listening to Eilish’s smoldering title song for the upcoming James Bond movie, No Time To Die.