‘Billions’ Is the Best Show of the Season

And you should be watching if you’re not already. That’s an order! 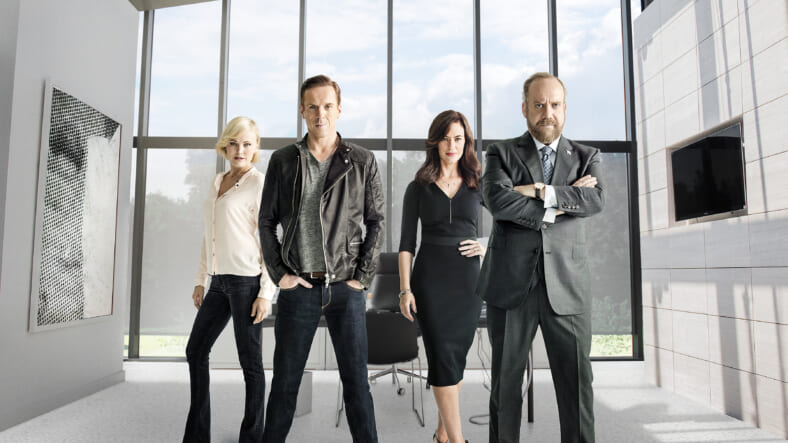 Moral ambiguity has never been quite so rich as it is in Billions, Aaron Ross Sorkin’s drama about a presumably crooked hedge fund manager (Damian Lewis) and his ethics-bending enemies (led by Paul Giamatti as U.S. Attorney Chuck Rhodes). Sure, the “who is really the bad guy” trope has been done to death, but Billions gives new energy to shopworn narrative themes.The show’s near the end of its first season, and while it’s gotten excellent reviews, we don’t feel like enough people are watching or talking about it, and we don’t want anyone missing out. There are many reasons you should be watching the show, but here are five. There’s still plenty of time to catch up before the April 10th finale.

You might recognize Maggie Siff as Mad Men‘s ill-fated department store heiress Rachel Menken. She played a powerful character there, but in Billions her influence is downright terrifying — a fact obscured by her warm, engaging demeanor and complete approachability. Wendy, who is married to Chuck Rhoades, her boss’s arch enemy, is an in-house corporate psychiatrist who coaches the traders and provides encouragement when the going gets tough. There’s no way to describe her bedside manner — you just have to see it. And the way she navigates the bizarre love/hate triangle between herself, her husband, and boss Bobby Axe — she’s smart as a whip but plays the “who, me?” game whenever they go head-to-head over her loyalty — is downright impressive.

Chuck and Wendy Rhoades have a relatively solid marriage — if you don’t count the fact that Wendy has no problem swimming naked with her boss — and plenty of heat in the bedroom. But it’s the kind of heat that comes from rope burn. Chuck loves to be dominated, and Wendy is happy to play the dominatrix. And because, on paper, Wendy is the more powerful half of this power couple (she makes a lot more money than her husband, on top of being a total babe with a line of interested suitors), it’s not so much role reversal as it is role enforcement. Based on typical pop culture depictions of S&M, that’s not usually how it works. But it works for them.

The Axe Capital Origin Story Is Something Else

On top of being a billionaire many times over, Bobby Axelrod (Lewis) is — when we first meet him — considered a hero and a respected philanthropist. Bobby was a partner in Axe Capital on September 11th, when a hijacked plane hit their World Trade Center office. But he wasn’t in the office at the time. Everyone else died, and he built the company back up, complete with payouts to his late co-workers’ families. Later in the season we learn exactly how he was able to do this, and you think for a minute that the news will absolutely ruin him. But you’d be underestimating Bobby Axelrod.

If there is one character who is colder and more calculating than Bobby Axelrod, it’s his wife, Lara (Akerman), who is always at least a half-dozen steps ahead of everyone else. The perfectly poised ice queen came from very humble beginnings and worked hard to get where she is. There’s no way she is going to give it all up without a hell of a fight, but she’s so cool it’s hard to know who will be her next target.

While it’s true you don’t see a lot of diversity inside the offices of Axe Capital, that might be a realistic reflection of Wall Street homogeny. But the women of Billions are plenty powerful, and there are WOC in critical positions of power at the Attorney’s office — Kate Sacker (Condola Rashad) in particular. Just like in the real world.