Listen to Your Friend Billy Zane

Maxim caught up with the actor and producer. 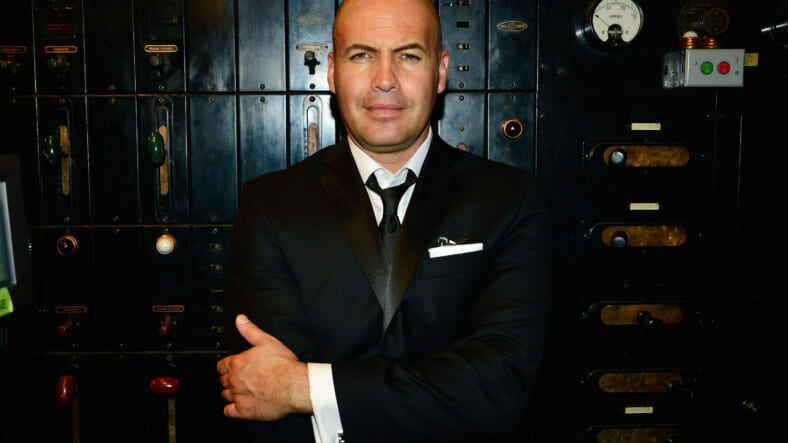 Billy Zane is probably more famous than he should be. We all know who he is, but why, exactly? He’s not a major celebrity. And he’s not recognizable in the way we know the face of a character actor we see all the time but can’t place. No — it’s his name. We might not know much of Billy Zane’s work, but we all know his name.

“The name said so readily is funny,” Zane says over sparkling water at Le Bilboquet on New York City’s Upper East Side. Zane, the evening’s best dressed diner, looks younger than his 50 years but not like he’s trying to.

Zane was referring to the famous scene in Zoolander, when Zane appears out of nowhere to talk Derek Zoolander (Ben Stiller) out of a “walk-off” against fellow model Hansel (Owen Wilson). “Listen to your friend Billy Zane,” Hansel tells Derek in the scene. “He’s a cool dude.”Fifteen years later, that brief cameo remains one of the hallmarks of his career and seems permanently attached to his persona. That, and a supporting role in one of the biggest movies ever made — 1997’s Titanic — as the dickish boyfriend who slaps Kate Winslet in the face. It was while filming that movie that he began to develop his craft as a painter, something he continues to do today.

“I had seven months in Mexico and a lot of time to kill. And access to an assemblage of ingredients,” Zane says. “A lot of found art. Lobster cages that would wash up. I always had an eye for the beauty of distress objects.”

The experience stuck. “I use house paint, recycled materials to this day. ‘Action painting’ they call it — a lot of ground, large surface, house paint rollers, back a car over it, get busy.”

Zane is honest about what drew him to the artist’s life. “The first influence was the love of the lifestyle.” He speaks with the confidence of someone who has achieved hard-won access to the finer things in life. His film credits are extensive — 120 deep — but few of those are starring roles, and the movies in which he was a leading man (Dead Calm, The Phantom) were released long ago, and not major box office successes. When we meet up, he’s in New York for the premiere of Zoolander 2, in which his cameo was reprised and expanded. “It’s charming and funnier than the first in many ways.” Critics and audiences didn’t agree — but that was no fault of Zane’s.

Back in January, Amazon launched a new drama series, Mad Dogs, starring Zane alongside Michael Imperioli and Steve Zahn. Zane’s role as Milo, a wealthy real estate developer in Belize who got caught up in the drug trade, is essential to the story, but short-lived. Asked if he was apprehensive about signing on to a series that [SPOILER ALERT] killed his character off early on, he says, “Not at all…It was liberating.” Zane loved the show, a sophisticated ‘bro’ story about “men behaving badly, but addressing real midlife crisis issues.” While Zane’s circumstances are a far cry from anyone in the Mad Dogs ensemble, he’s experienced his own version of midlife angst.

“It’s that gnawing feeling of that possible human that’s within us, it requires a fulfillment born of true application,” Zane says. “This is your fighting weight, this is your window, you are at the top of your game, what are you using your skill set really for? You’ve got it all but you can’t sleep at night, you’ve got that hole in your heart. What’s going on?”

Here, Zane is light on specifics, cautious about revealing details of his private life. We know he was once divorced, and now lives with his fiancée, model Candice Neil, and their two young daughters in the Greater Los Angeles area. (He won’t disclose the neighborhood until I turn the voice recorder off.)

Zane also speaks in vague terms about a side career of sorts, one that sounds a bit like a communications consultant-at-large for all manner of domestic and global crises.

“The curious access celebrity affords…heads of state, masters of industry, who all want a photo op for their kids. You’re in. You’re at the table. But the one thing I’ve found in interviews is that the shortfall across the board is communications,” he says. “Which is my wheelhouse. I have something for that. I impart with an insight upon gleaning a little bit of what they need or what their pain is or what they are trying to say. I can actually speak with authority and spitball a little bit. But kind of understand and help solve their malaise in a very kind of practical way.”He’s reluctant to provide details. “I’m under NDA a lot.” Eventually he yields, and speaks of a meeting he had with a superintendent of police “of a city I won’t mention.” The department had been working on a PSA campaign addressing gun violence, and Zane suggested they instead launch a YouTube channel that delivered news and information, and a talk show “on police subjects.” “They were relying on traditional news gathering which is diametrically opposed to positive stories for the most part. In their business model they were relying on these opposing forces to get their message out and it was failing them,” he says. The department didn’t implement his suggestions.

Zane comes across like someone who is putting on an act, but here’s the twist: He doesn’t care if you know it’s an act. The performance is part of the performance. “I invented Billy Zane,” he says, almost defiantly. And there’s no real distinction between his public persona and the private man — “to the great annoyance of the people closest to me,” he says. “It’s like, ‘Would you stop being Billy Zane?’”

You can tell that it’s important for Zane to be perceived as debonair, as a member of the upper crust, as someone who has “an association with luxury,” as he referred to himself, without prompting. But while Zane may choose to indulge in the finer things in life, materially speaking, he’s not a snob when it comes to people. He’s unfailingly polite to everyone at the restaurant who greets him, to his publicist, to a flustered journalist who almost had to be surgically removed from her coat when the zipper got stuck. (At least it was a decent label. God bless Nordstrom Rack.)

If there’s an artificiality, even a pretentiousness, to Zane’s depiction of his world and his life, it’s not one that seems intended to hide dissatisfaction. Rather, Billy Zane so loves being an actor that he doesn’t see why you can’t play a character every day.

“We’re all five versions of ourselves,” he muses. “In my closet, I’ve got Cary Grant, Picasso, a motorcycle garage-wear grease monkey. What is that, three? Who else. A Ralph Lauren…and Hemingway. I pick from the best.”