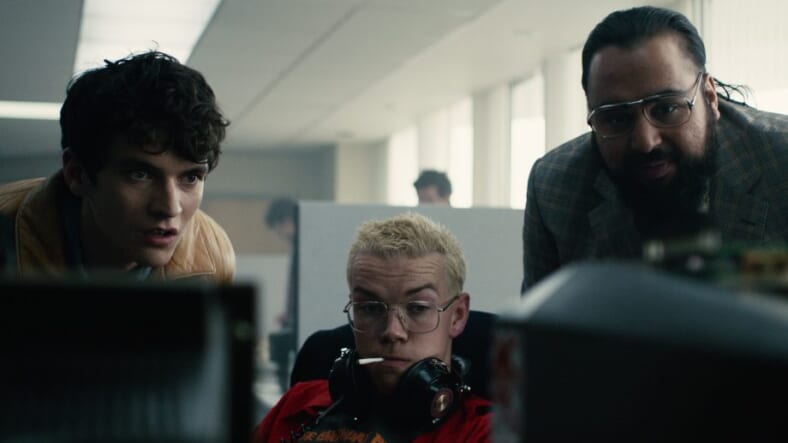 Last week, Netflix released the much-anticipated interactive Black Mirror episode Bandersnatch, and it was just as creepy as anticipated.

It was also filled with Easter eggs from previous seasons, and the internet has been working hard to discover them all.

Here are all of the Easter eggs from Bandersnatch, but if you haven’t seen it yet, stop reading now and go watch it immediately. Serious spoilers are ahead, and the episode is fantastic.

The Tuckersoft game Metl Hedd is a nod to the Season 4 episode Metalhead. You can check out the game right here on the Tuckersoft website.

BREAKING: You can actually play 'Nohzdyve', one of the games from Black Mirror: Bandersnatch, on your Spectrum. They even created a retro-looking #Tuckersoft website for the purpose, this is insane! #Netflix #ZXSpectrum #Bandersnatch #80s #easteregg https://t.co/x6XhnW5GxB pic.twitter.com/tqBJmwUDTT

There’s also a secret ending featuring the episode: We see Stefan listening to a tape that’s playing weird noises, and if you run those sounds through a ZX Spectrum emulator, it gives a QR code that takes you to a page on the Tuckersoft website where you can download Nohzdyve. Neat, huh?

Plus, if you click on the ad with the stars at the bottom of the page, you can find out your rating on the site rateme.social, just like in the episode Nosedive.

At the bottom there's a banner ad. Click it and you'll get an option to rate yourself or others like in the Nosedive episode!!#blackmirror #bandersnatch pic.twitter.com/pl9gArvWFu

Another play on names: Stefan’s psychiatrist is Dr. R Haynes, which could mean that she and Rolo Haynes from Black Museum are related.

Did anyone else pick up on Dr R Haynes in #Bandersnatch & Rolo Haynes in Black Museum? Related? Easter Egg? 🤔🤔

The same bracket symbol Stefan is being haunted by is seen throughout the Season 2 episode White Bear.

On the Tuckersoft page for the game Terror on Rannoch B, there’s another ad at the bottom of the page for the dating service Coach…which is the service used in Hang the DJ.

I went ahead and clicked on the ad and tried out the “system” with myself. Apparently, my relationship with me expires in nine years. Yay.

In one of the possible endings in Bandersnatch, we jump from the ’80s to modern day, where a young woman named Pearl Ritman — Nohzdyve developer Colin Ritman’s daughter — is adapting Stefan’s game.

When she’s being interviewed on television, various headlines run across the bottom of the screen, with the first one reading: “Former PM Michael Callow wins celebrity bake-off.”

If you’ll recall, Michael Callow is the British Prime Minister who was blackmailed into having sex with a pig in the Season 1 episode The National Anthem.

What’s more is that Bandersnatch teases a game called Pig in a Poke with a poster as a reference to the act, and the Tuckersoft website has a description of the game, reading:

“Who’d have thought a ramble through the countryside would be so fun? You must escape from flying arrows and giant bees, squishing the little mice as flowers bloom all around you.”

8. Hated in the Nation

The second headline in the same news broadcast reads: “Granular to unveil prototype ‘pollinator drone.’” You may remember this from the Season 3 episode Hated in the Nation, where robotic bees are hacked to go haywire, killing a lot of people.

Yet another headline says: “Liam Monroe enters Buckingham Palace.” Liam Monroe was the Conservative Party politician in The Waldo Moment, in which a cartoon bear named Waldo actually gets involved in politics — but only to mock politicians.

However, his mockery only made Conservatives even more powerful, and apparently ended up putting Monroe in British state power.

It may also refer to An Entire History of You from Season 1, where people have implants that allow them to replay memories.

We see a headline that announces the cast of Space Fleet reunited at the Emmy Awards, which is the Star Trek-like show that Robert Daly is obsessed with in USS Callister.

The video game Valdack’s Revenge is also produced by Tuckersoft, and the poster is even on Stefan’s bedroom wall. See it here on Reddit.

On Tuckersoft’s website, there’s a poster for a cycling game called Rolling Road. The description reads:

“Think you’ve got what it takes, hot shot? See if you can ride your bike day in, day out, going absolutely nowhere, but everywhere at the same time.”

Clearly, this is a nod to Fifteen Million Merits, where everyone is forced to cycle on a stationary bicycle to accumulate merits…and the term “hot shot” is the name of the singing show.

Another reference to the episode is the fact that in Bandersnatch, Stefan’s dad smokes a brand of cigarettes called Wraith’s Gold Band, and one of the judges from Hot Shot in Fifteen Million Merits is named Wraith.

In the newspaper we see when Stefan kills his dad, multiple previous episodes are mentioned.

We’ve been seeing TCKR Systems in multiple Black Mirror episodes, including San Junipero where they created the technology that sent the elderly to an alternate reality, and in Black Museum, where museum proprietor Rolo Haynes worked for them.

Now, it’s appearing in Bandersnatch as Tuckersoft, which is where Stefan works.

Here’s a different one: All the way back in the Season 3 episode Playtest, Bandersnatch made a cameo appearance on the cover of a magazine.

In the Black Mirror episode PLAYTEST from Season 3, the fake Edge Magazine mentions Bandersnatch on the cover.

I can't believe you knew about this @dannytrs and have been holding out on us this whole time. pic.twitter.com/GGR3s3Nsdc

Why so many Easter eggs? Black Mirror creator Charlie Brooker says Bandersnatch could actually be the origin story for all of the episodes in the series.

He told the Hollywood Reporter:

“Well, I think you will find — as [‘Bandersnatch’ games developer] Colin Ritman explained — that there are many, many realities and universes, so I guess this probably opens up one of them. With the Easter eggs and with the wide mythology surrounding the show, it’s useful for us to think of it that it’s a nice nod for superfans who notice that Tuckersoft becomes [Mirror-verse tech company] TCKR. It can function like that.”