‘Black Mirror’ Got Renewed for a 5th Season, So Celebrate With the Netflix Hit’s Greatest Moments

Which episode is your favorite? 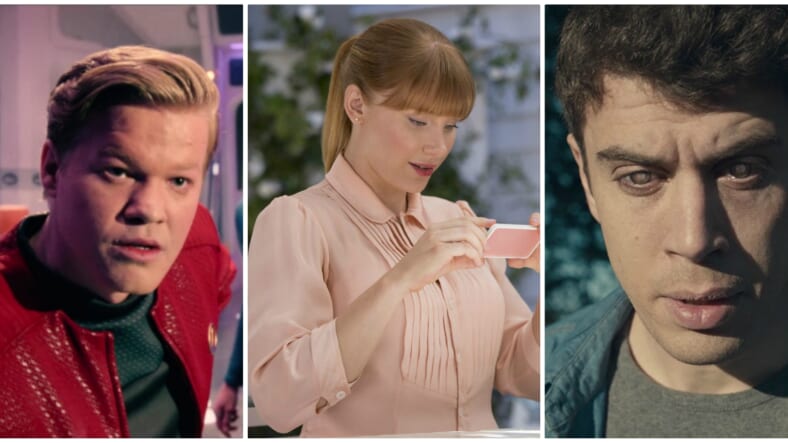 Attention all Black Mirror fans! I have amazing news that we’ve all been waiting to hear: The creepiest, most dystopian sci-fi series on Netflix just got renewed for a fifth season. HELL TO THE YES.

This very good news was announced on Twitter, when the official Black Mirror account posted a mysterious and frankly super eerie teaser with the tagline: “Be Right Back,” referencing the Season 2 episode, as well as the caption “The future will be brighter than ever.”

The future will be brighter than ever. pic.twitter.com/slVeg3VPd7

Hmmm…what do you think that caption means? I’m going to assume it means Season 5 is when and how we find out that human existence and the world as we know it is just an episode of Black Mirror and we’re not actually humans but simulations, or something.

Wow, I actually just scared myself with that thought. Oh my God.

Anyway, when Season 4 was released in late 2017, fans went absolutely nuts over how incredible the new episodes were…and for good reason. Each episode makes you think deeply about life and then proceeds to straight-up blow your mind, because the fact that it could all happen in real life is just too much to handle.

Unfortunately, there’s no word on when the season will air or how many episodes there will be, so I guess we’ll just have to wait and see. “Patience is a virtue, but rest easy knowing there is more Black Mirror on the way,” a spokesperson for Netflix told Huffington Post.

Well, since we don’t know when we can expect to get scared shitless from Season 5, let’s get our fill of Black Mirror madness by revisiting some of the creepiest episodes, presented to you with GIFS.

Let’s start with Season 1, where screens track your eye movements and force you to do things you really, really don’t want to do, as we saw in “Fifteen Million Merits.” A literal nightmare.

In “The Entire History of You,” brain implants make it easy as pie to remember every tiny detail in your life, and guess what? Thanks to technological advances that don’t know when enough is enough, we’re pretty damn close to this in real life. Yikes.

In “Be Right Back” from Season 2, a.k.a. the most heartbreaking episode of the entire series, artificial intelligence takes a human form, which proves to be unbearably unsettling.

And in “White Christmas,” you don’t just block people on Facebook…you block them in reality! Later, Jon Hamm.

Remember the social media-obsessed, insincere happiness of everyone in the Season 3 episode “Nosedive”? Almost feels real, doesn’t it?

Aaand you probably freaked out the moment you realized video game companies are probably (definitely) testing virtual reality similar to the one in “Playtest.” I know I did.

Hackers (and child pornography consumption) ruin lives in “Shut Up and Dance” from Season 3. Fair warning that this can definitely happen in real life.

In “Hang the DJ” from Season 4, there’s a new kind of omnipotent dating system that tells you who to date, and for how long. Perhaps the good folks at Tinder will come up with an algorithm for something like this…? Hopefully not, though.

And finally, there’s eeire black and white episode, “Metalhead,” where AI has gone a bit too far. Let’s just hope that’s not us in a few years where our microwaves and vacuum cleaners try to kill us.

How psyched are you to see the next season?