Marvel is already earning rave reviews for its upcoming adaption. 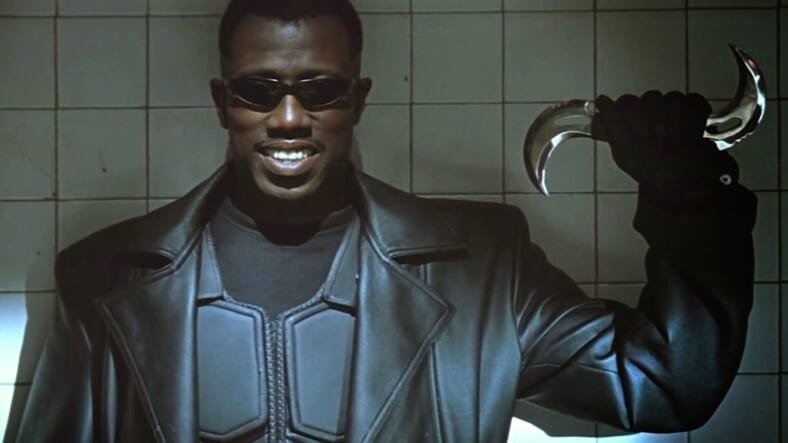 Ahead of the greatly hyped release of Marvel’s Black Panther, which has broken records for Fandango pre-ticket sales and is projected to earn up to $120 million in its opening weekend, Wesley Snipes revealed to The Hollywood Reporter what could have been.

Rumors have existed for some time that Snipes had endeavored to adapt the Marvel comic for the silver screen in the 1990s, which led him to star in Marvel’s first smash hit Blade in 1998. Now, he has told all on his vision for Black Panther, as well as the cultural, industry and technological challenges that stood in his way.

Similar to what the Marvel movie appears to have captured from the comics, Snipes wanted to a depiction of Africans many had never seen before: of a technologically-advanced and sophisticated society.

“I think Black Panther spoke to me because he was noble, and he was the antithesis of the stereotypes presented and portrayed about Africans, African history and the great kingdoms of Africa,” Snipes told THR. “It had cultural significance, social significance. It was something that the black community and the white community hadn’t seen before.”

“Many people don’t know that there were fantastic, glorious periods of African empires and African royalty — Mansa Musa [emperor of the West African Mali Empire] and some of the wealthiest men in the world compared to the wealth of today,” Snipes added. “That was always very, very attractive. And I loved the idea of the advanced technology. I thought that was very forward thinking.”

However the name Black Panther was perhaps too controversial for the times. Many mistook it for the leftist black rights movement, still seen as violent and insurrectionary to critics today. “They think you want to come out with a black beret and clothing and then there’s a movie,” Snipes said of the response to early pitches.

Ultimately, Snipes admitted defeat. Apart from that Marvel was a struggling entity at the time, Snipes did not believe he would have the resources needed to bring the futuristic African nation Wakanda to life.

“Ultimately, we couldn’t find the right combination of script and director and, also at the time, we were so far ahead of the game in the thinking, the technology wasn’t there to do what they had already created in the comic book,” Snipes explained.

Thankfully, 2018 is light years ahead of the early ’90s. Buzz from critics who caught pre-screenings was overwhelmingly positive, with many recognizing the movie as an important cultural moment. The cast, Chadwick Boseman as T’Challa, Michael B. Jordan as Erik Killmonger, Lupita Nyong’o as Nakia, Danai Gurira as Okoye and Letitia Wright as Shuri, was all praised.

BLACK PANTHER is incredible, kinetic, purposeful. A superhero movie about why representation & identity matters, and how tragic it is when those things are denied to people. The 1st MCU movie about something real; Michael B. Jordan’s Killmonger had me weeping and he’s the VILLAIN

#BlackPanther: I never wanted this movie to end, and as soon as it did I wanted to go back. Solid action, smart story, tons of personality. Shuri is my new fave, Nakia is everything, Killmonger is incredible, T'Challa deserves to rule the MCU. Coogler has done it again. 💜🖤💙 pic.twitter.com/t9gG3DLuCL