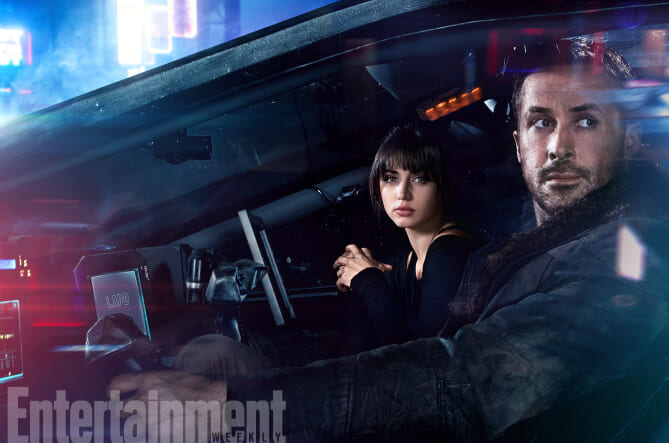 For whatever reason, the team behind the forthcoming Blade Runner 2049 have chosen this week to stage an all-out press assault (not that we’re complaining). In addition to the drop of the thrilling first teaser trailer, Entertainment Weekly has obtained seven gleaming new images from the hotly anticipated sci-fi sequel.

The images take us into the futuristic hellscape of 2049 Los Angeles, no less claustrophobic, soulless and oddly stylish than the one Ridley Scott conceived in the original 1982 film. They also provide first-look images of stars Harrison Ford and Ana de Armas in character and Ryan Gosling in a badass shearling jacket.

See the other six, below:

We are officially pumped to see Denis Villeneuve’s take on the cerebral sci-fi classic. The acclaimed director recently gave an interview with Screen Daily that featured even more gems sure to stoke audience enthusiasm.

For one, the film will almost certainly have an R rating, like the gritty original. In fact, it will be “one of the most expensive R-rated independent feature films ever made,” a fact producers seem to be celebrating.

The steep production costs are likely attributed to the special effects, which will not overly rely on CGI. “When I watch a movie that’s mostly CGI, I’m disengaged,” Villeneuve said.

Lastly, the director teased that there may be more sequels in the works as his mind is already reeling with possibilities: “I have two more ideas now that I would love to do. [And] Blade Runner could go on… we’ll see how this one goes.”

There’s a lot to g excited about. Still, the release is not until Oct. 7, 2016, so we will just have to be content with watching the new teaser on repeat until anything new is thrown our way.