A super-rare action figure of the intergalactic “Star Wars” bounty hunter is about to make history. 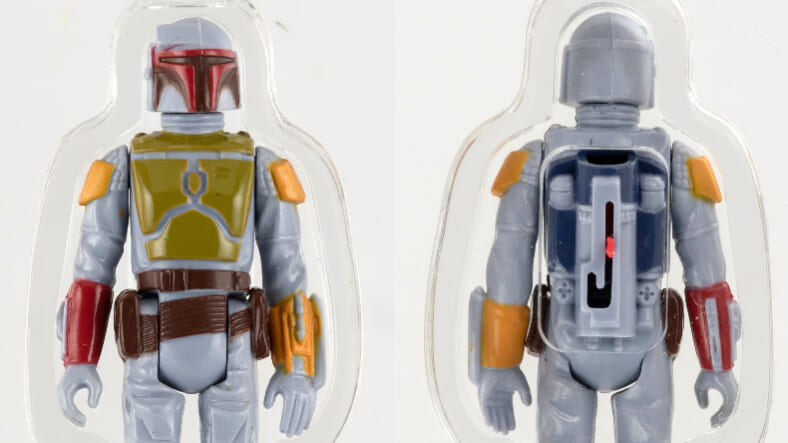 Boba Fett, the armored bounty hunter best known from The Empire Strikes Back and Return of the Jedi, isn’t just one of the coolest old-school characters in the Star Wars universe. He’s also about to make auction house history.

Fett, whose previous biggest gig was being hired by Darth Vader to capture Han Solo, is now about to push pricy Star Wars collectibles into the stratosphere. A 1979 plastic prototype Kenner action figure, featuring Fett wearing his signature Mandalorian armor and rocket-firing backpack, could fetch up to $500,000, says Hake’s Auctions.

“It is the Holy Grail of Star Wars collecting,” Kelly McClain, a spokesperson for the auction house, told the New York Post. “It’s extremely unique.”

Less than 100 of the action figures were ever made, and were yanked from shelves after the missile-firing backpack was declared to be a choking hazard to kids, reports the Post. Less than 30 of the 3.7-inch-tall action figures are now believed to be in existence.

The ultra-rare toy had been offered as part of a rebate promotion before the recall, in which fans mailed in a proof of purchase to obtain one.

“A lot of kids at the time sent away for it, and expected to get it. But instead they got one without the backpack,” McClain told the Post. “Kids from that generation have memories of it, so that makes it special.”

Bidding had already topped $133,000 as of Friday, beating the current record of $112,926 for any auctioned-off Star Wars toy. Bidding on the historic action figure ends Nov. 7.