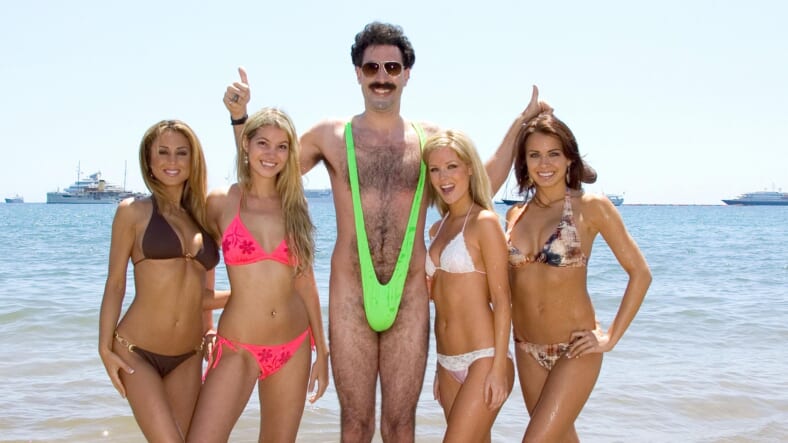 The title of Sacha Baron Cohen’s upcoming Borat sequel has been unveiled, and it’s as ridiculous as anyone could have hoped for. Watch the full official trailer here:

What’s more, the tongue-twister of a sequel will premiere on Amazon Prime on October 23, less than two weeks before the election, according to Deadline, which reports that Borat 2 “was the first movie made during the COVID-19 shutdown, shot [quickly] as coronavirus shooting restrictions were eased.” A short teaser was previously released below:

Consequence of Sound relays that the absurdist title was revealed in filing with the Writers Guild of America. Cohen is credited with writing the screenplay alongside collaborators Anthony Hines, Dan Swimer, Peter Baynham, Erica Rivinoja, Dan Mazer, Jena Friedman, and Lee Kern.

CoS has more here about the plot:

Rumors of a Borat sequel first emerged earlier this year, after Cohen was seen filming scenes in the character’s costume. As this point, the film’s plot remains a closely guarded secret, but we do have some clues to suggest he’ll be heavily targeting the GOP.

Beyond the reference to America’s conversion therapy-supporting Vice President in the film’s title, Cohen was recently spotted infiltrating a far-right rally. He also had the cops called on him after attempting to prank Rudy Giuliani.

Earlier this month, Collider reported that the Borat follow-up “has already been shot and even screened for a select few industry types” and even speculated about the sequel’s plot:

Plot details remain vague, but what we know is that Borat is no longer the little-known Kazakh TV personality he played in the original 2006 movie. The public knows who he is now, so he has to go “undercover” to interview people.

One source described the film as “Cohen playing Borat playing Cohen,” but since we published this story, another source reached out to refute that description while still confirming the project’s existence.

Borat grossed an estimated $262 million worldwide and spawned countless Halloween costumes and “Very Nice” Kazakh impressions after its zeitgeisty 2006 release, which paved the way for similar Cohen movies like Bruno ($138 million) and The Dictator ($179 million), though both fell short of Borat‘s box office success.